When last I tap-tap-tapped away, I promised you some visual splendors from Nuremberg where I was fortunate enough to be for work last week. Nuremberg is probably not a common tourist destination but its old town is architecturally gorgeous in that medieval way that this area of Europe seems to do so very well.

Nuremberg is, for most of us, most commonly linked with the activities of the Nazis during WWII, being the location chosen by the Nazi Party for the Nuremberg rallies and then later the site of the most famous war crimes trials in modern history. But it is a city with a long and intricate history. Founded at the turn of the 11th century, Nuremberg’s importance as a location along key trade routes grew until the late 1500s. During this period, Nuremberg was known as the ‘unofficial capital’ of the Holy Roman Empire and in the 15th and 16th centuries, Nuremberg was also considered to be the centre of the German Rennaissance.

The Kaiserberg stands high overlooking the town and it was here that all of the German Emperors of the Holy Roman Empire resided at one time or another. This Imperial Castle is the symbol of Nuremberg and is deemed to be one of the most important palaces of the Middle Ages.

We were lucky enough to be entertaining our customers here and so I was able to get some amazing snaps of the views over Nuremberg. 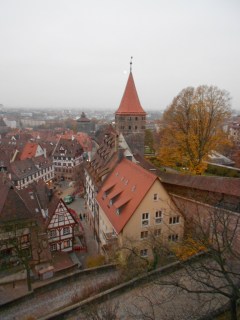 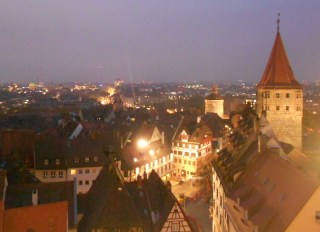 As with all good trips to Germany, we also managed some dining of the less formal kind and I can report that there was much sausage and dumpling eating, beer drinking and generally sociable behaviour amongst we good folk. Here’s a sampler from our excursion into Central Nuremberg for sausages earlier in the week:

The end of the week saw it down to just two of us who had stayed on to tidy up so to celebrate the end of a successful week, we headed off to Peruvian restaurant (as one does in downtown Nuremberg) El Encanto. The ambience may have been a little lacklustre…

…but the food was so good (avocado and tomato salad, dumplings and then fish for main – completely scrumptious) and the cocktails so forthcoming, I forgot to take another picture until the funky teaset came out at the end.﻿

Saturday morning arrived and I packed up my things and headed off to the station for the fastest-train-in-Germany (300km/hr) trip back to Munich to connect with my flight. But after the reasonably balmy temperatures of the week, I was little under-dressed for the bone-chilling air on the platform…

…so it was with delight that I finally climbed on board the carriage, sank into my seat and soothed by the high speed whirr of the train, let myself alternate between dozing in the warmth and simply watching the world go by.
﻿﻿