So it was announced at the end of last week that car parking charges are to be introduced to Richmond Park.  All I can say is ‘thank God it’s over!’ 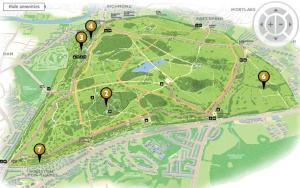 The issue of car parking charges for Richmond Park has been used by politicians, most recently Zac Goldsmith, to wave the flag of ‘we are the voice of the community’ and general ‘defender of the everyman’ and I am heartily sick of it.
Sick of sensationalist flyers being pushed through my letterbox.
Sick of emails (trying to be inflammatory) requesting my signature on a petition.
Sick of unrelenting requests to attend rallys to demonstrate against this.
Not one party has delivered anything on this issue other than sensationalist rubbish.  Where was any understanding demonstrated about the massive cost of upkeep to Royal Parks which all of us are free to use?  What about the preservation of a wonderful, natural space for people to enjoy?

Don’t get me wrong.  I think there are a multitude of issues here and living near Kingston Gate, I do wonder whether we will have a return to careless (and sometimes ridiculous) parking exploits in the surrounding streets and whether any parking fine revenue raised (and there will be!) will be added to the coffers for the upkeep of the park itself.  But I am tired of the grand-standing and the lack of substantive information on this issue particularly given one MPs ‘soap-box’ stance on this following their move from Green to Tory party MP for the constituency.

My hope is that MPs will now focus on issues for the community, ones that will make a real difference to people living in the borough rather than the ones who may (or may not) visit it.  We have just come through one of the most difficult economic periods in the last few decades and I would like to see a focus on responsible economics and community values…

3 thoughts on “A Park About Politics….”