Today, I was all set to post about other things. Not Mother’s Day mind, as ‘mine’ happens in May (but am wishing all Mums celebrating today a fab day just the same). But I had a few ideas from the week and following on from my two part ‘danger mouse’ thriller, I was keen to change the rhythm and tone again to keep things fresh and interesting for all of you lovely Gidday-ers.

But I’ve had the most delicious couple of hours and I just HAD to tell you about it.

I’ve been to the cinema.

So what? I hear you say.

No I’ve been to THE cinema, the delightful Phoenix Cinema in East Finchley.

It’s what I call a proper cinema with old fashioned, theatre style seats, lots of leg room  and a shiny, swishy gold curtain at the front. 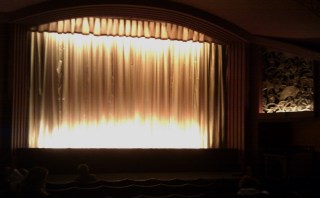 Purpose built in 1910, it’s a single screen cinema, and was actually saved from the wrecking ball in 1985 by the formation of The Phoenix Cinema Trust, a charitable organisation that runs the theatre for the community, reinvesting its profits both in education and maintaining this wonderful tribute to cinematic history.

I used to live close by a similar independent cinema in Melbourne (The Classic in Elsternwick for any Melburnites reading this). My old home-town has quite a few thriving independent cinemas and it’s something I had missed a little while living in South West London. On a Saturday or Sunday afternoon, I used to love wandering down and submitting myself to a screening of something I’d choose simply by standing at the Box Office and seeing what was about to start.

Anyhow, The Phoenix is not far from the new Gidday HQ and this afternoon there was a ‘From the Archives’ screening of Imitation of Life, a ‘legendary Hollywood melodrama’ (which I’d never heard of) about racial identity. I thought it seemed a pleasant way to spend a Sunday afternoon.

The story centres firstly on Lora, a young widow chasing her dreams to be an actress who is supported by her black housekeeper, Annie in the raising of her daughter Susie  alongside Annie’s own  ‘light-skinned’ daughter Sarah Jane. Lana Turner plays the ambitious and glamorous Lora and, along with the marvellously good-looking John Gavin as her love interest and a perky Sandra Dee as Susie, provides much of the froth and bubble as well as a little wry humour throughout the film. But as things unfold, it is the relationship between Annie and Sarah Jane which gives this story its real potency.

This film was made in 1959. It would have been quite a daring affront to the ‘seen and not heard’ issue of black and white America but more importantly, the film shows that there’s more to the world than merely a black versus white view and Susan Kohner’s rebellious and then bittersweet performance of Sarah Jane captures this better than any words I could write here. And the industry obviously thought so too with Kohner winning a Golden Globe for Best Supporting Actress as well as an Oscar nomination (along with Juanita Moore for her portrayal of Annie).

Two and a half hours flew by and before I knew it, I was sitting contentedly on the bus coming home filled with absolute delight at my new discovery.

At the venue or the film? I hear you ask.