This morning I met up with an Aussie friend of mine for brunch. S travels a lot for work and since he has the next 2 weeks in London before his next round of jet-setting, we decided to grab the bull by the horns – so to speak – and catch up over some scrumptious vittels and good coffee at The Modern Pantry in Clerkenwell.

S and I used to work together and as such, he is a fellow afficionado of both the Melbourne coffee scene and that bastion of Italian yummy-ness, Lygon Street. Way back when we worked together, we were fortunate enough to share premises with the barista training school of a very well-known Italian coffee brand. As such, there was no schlepping around with freeze-dried instant or filter coffee for us. It was punchy espresso with gorgeous caramel-coloured crema, warm milky-smooth lattes and luscious foamy (not frothy people – there’s a world of difference) cappuccinos. Let me tell you, we knew our Robusta from our Arabica.

Then we came to London. And caffeine confusion reigned.

You see there are two types of coffee that are ubiquitous in the Land Down Under (and for that matter, in the Land of the Long White Cloud) but as rare as hen’s teeth in Ol’ Blighty.

The first is the Flat White. It lies somewhere between a warm milky latte (a flat white has less milk and is served hot) and the foaming cappuccino (the flat white has less/no foam). It’s hard to find in London but with the likes of The Australian Times providing a handy list of good flat white-rs in London Town alongside a little Antipodean word-of-mouth, it’s possible. But most places here will translate the Flat White into a white coffee (a black coffee with cold milk), completely ignoring the craft of creating a steaming Long Black before adding a large dollop of warm milk.

Which brings me to my second point – the Long Black. In non-barista terms, it’s a shot of espresso poured into hot water to preserve the crema. 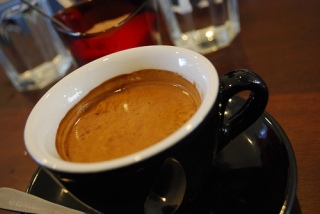 Simple right? Not nearly as complicated as the Flat White one would think.

Just ask for a Long Black here and watch the bewilderment appear across the face of one’s waiter. Then try to explain it ie. a shot of espresso with hot water (and that’s not getting into the size of the cup it should come in). In most places, the response is ‘oh so you want a black coffee?’ No. Not if you are going to stick my cup under the coffee filter for 5 minutes.

Some will respond by correcting you calling it an Americano, grinning proudly at you as they successfully navigate the lingo of yet another of the half million or so Antipodean immigrants living in London. Well no actually – but at this stage, an espresso topped up with hot water is starting to sound like an acceptable (and considerably less stressful) compromise.

But all I really want is a proper Long Black. I want a lovely shot of espresso – that’s right, like you normally give one who orders an espresso – poured into the cup with hot water. Rich and smooth with a velvety crema. No bitterness, no acrid aftertaste. Understated yet still packing a caffeine punch.

Anna Hansen may have been ‘chef-fing’ all over the globe – and let me tell you the food was really, really good – but for the coffee alone , The Modern Pantry gets my vote.

Smooth, rich and velvety. Exactly the way I like it.

8 thoughts on “The Land Sans The Long Black…”