This blogging lark is a strange caper. We online literary hopefuls tap-tap-tap away in the hopes that people (that’s you – in case you were wondering) will read all about our passions, woes and little foibles, whilst wondering what the perfect recipe will be to whet your appetite.

Anyhow for those of you uninitiated in the delights of blogging oneself happy, I think I speak for the majority when I say we bloggers love a stat or two. How many visitors pop in to check things out, where they come from (geographically and virtually) and which posts they read can add an elated squeal, a puzzled frown or, more often than not, a combination of both.

A little while back, I decided to add my Top 5 Posts for the Week to the Gidday From The UK home page. It was a little experiment to see what Gidday-ers were reading each week and also designed to offer anyone with a little reading time on their hands, a quickie guide to my most popular posts.

As you would expect, the most recent posts appear. Of late, both Did Somebody Mention Christmas? and 3 Sleeps To Go…A Little Pre-Christmas Cheer (from 2010 and 2011 respectively) have popped up.

(Let’s face it, the man in the red suit arrives in 74 sleeps and Gidday has probably appeared in a few early – rather too early for my liking – festive searches.)

But there are times when I find myself at a loss to understand why a particular post suddenly appears.

I mean what’s with the sudden surge of interest in Valencia? 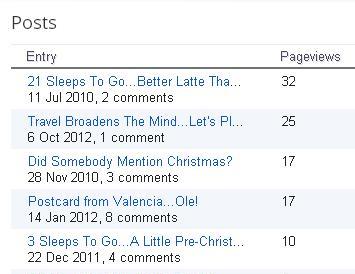 Is there something happening over there that, being the Metro-less traveller that I’ve been this week, has passed me by?

Can anyone shed a little light on this conundrum?