I can’t quite believe that I’ve been back five weeks. The days have flown by and it feels like much longer since I sat under that hot blue sky and felt the fierce Australian sun on my shoulders. Particularly since I have been rugged up at home this weekend keeping the chilly grey dampness outside well at bay.

This afternoon I’ve been watching Fried Green Tomatoes at the Whistle Stop Cafe. I’ve seen snippets of it before but have never sat and watched the whole thing through. What an amazing movie – kind of like Beaches and Thelma and Louise (enduring female friendship flicks) combined with The Help and To Kill A Mockingbird (for commentary on racial injustice). If you haven’t seen these films, I’ll let you google them for yourself to avoid this sentence getting a little ‘link-crazy’. 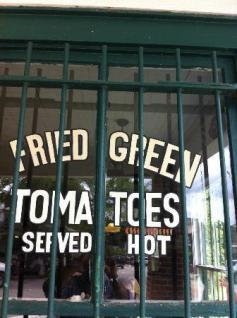 The four leading ladies are extraordinary and I can only surmise that there was some stiff competition during the 1992 awards season for while Jessica Tandy and Kathy Bates received nominations at the Oscars, BAFTAs and Golden Globes, the ‘Whistle Stop Cafe’ trophy cabinet remained strangely empty.﻿

There are times when I still find it difficult to believe that the era of black oppression and the Klu Klux Klan actually existed. But then prejudice is still prejudice no matter what the ‘colour’ and I think about Sarah’s Key (which I saw recently at my beloved Phoenix as part of Holocaust Memorial Day) a film that tells the story of the 13,000 Jews rounded up by the French authorities in Paris in 1942 for transportation to Auschwitz and my visit last September to the old ghetto areas of Krakow and the camp itself.

And then I think about the recent ‘burkha debate’ that has reared its rather unattractive head in various institutions of ‘learning’ across Europe and of a recent book I read called The Cypress Tree (the Book Nook 2013 #3) by Israeli-born journalist Kamin Mohammadi and it seems to me we’ve not come so very far at all.

Anyway, the final credits rolled and I found myself wondering why I’d never watched this movie before. And it strengthened one of my ‘resolutions’ (for want of a better word – I don’t really do resolutions) to branch out from my traditional favourites and to watch some older, unseen films when the comfy couch beckons again on another rainy Sunday afternoon.

2 thoughts on “Another Rainy Sunday…”