Yesterday I decided that Sunday would be baking day at Gidday HQ.

I’ve been thinking about this ever since I got the More Secrets from the Beechworth Bakery cookbook for Christmas. Reading through it has made me think how wonderful it would be to develop some proficiency in bread making so that I could just whip up a tasty loaf or two on a whim rather than it occurring like an enormous ordeal.

The silly part is that I’ve already had some previous successes with a scrumptious Rosemary and Walnut Loaf and my very first attempt at Easter buns being rather light and fruity (and delicious with lashings of butter) so my thinking’s that I just need a little more practice.

Anyhow after an inspirational Saturday evening watching my favourite foodie movie Julie and Julia, I decided to face up to last year’s Easter bun bomb and have another go.

With hopeful spirit, I folded and rolled my dough and submitted it to its second proving…

I’m attempting Tiger Bread which involves painting the top of the proven dough with a paste of plain flour, rice flour, water, caster sugar, salt and vegetable oil. So it’s swish swish swish with my brush and into the oven…

…and about 40 minutes later look what I had!

I tapped it on the bottom to make sure it was cooked through then left it to cool a little before carving myself a slice. 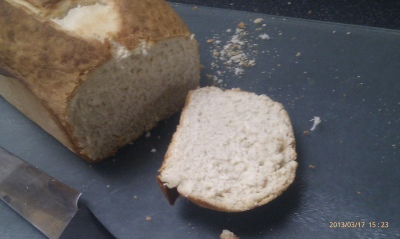 It was delicious! So much so that I decided that the only thing for it was to whip up a batch of pumpkin soup to go with it for lunch.

And now that I’ve proven my point – albeit to myself – I can’t wait to dip back into the secrets of the Beechworth Bakery and try something else. Easter’s just around the corner you know and I need to redeem myself with regard to my unauspicious output from last year…

Gidday Disclaimer:
This is a bread-maker free home. I do not need another gadget to take up more valuable space at the back of the cupboard and the addition of my beloved birthday coffee maker to the Gidday HQ benchtop last year is as far as I’m prepared to go on that score.
Yours in Baking Earnestness
The (Only) Gidday Bread-Maker

2 thoughts on “Proving A Point…”