I’m not one for getting lost. My sense of direction is pretty good and while there are usually a few minor detours, I’m never really too far from where I want to go…until this, my third visit to Montmarte.

In normal Gidday style, I checked into my hotel mid-afternoon, sorted a few things and was out the door ready for an afternoon meandering around Montmarte. The purchase of a 10-ticket carnet for the Metro had me flushed with early success and I emerged from Lamarck-Caulaincourt station to head in the general direction of Sacre Cœur…or so I thought.

I ended up here…

…hungry and feeling like I’d been walking in circles. Luckily the boulangerie / patisserie on the corner had some tasty vittels beckoning from the front window (and no-one else was serving anyway) and whilst munching contentedly on a chicken panini (followed by a chocolate eclair), I discovered how truly off piste I was.

Re-directed I set off purposefully again and finding myself back where I started, made sure I turned right this time to find this… 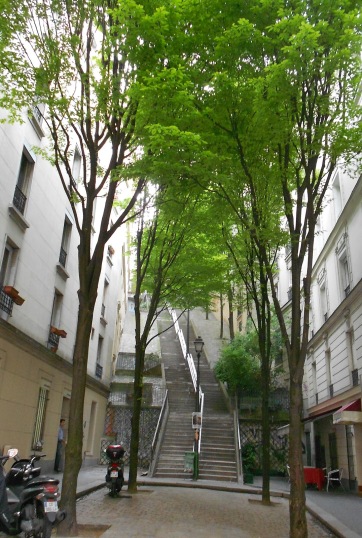 Montmarte is famed for its staircases…there goes my chocolate eclair. Only a few minutes on the hips! 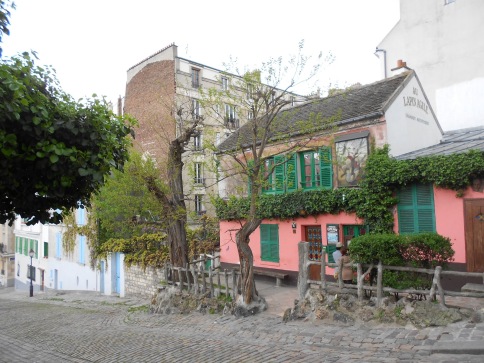 Au Lapin Agile or La Maison Rose. Not sure which name was actually associated with this place but it was unavailable for the vittels recommended by the guidebook when I walked past.

Paris’ only remaining vineyard has 2,000 vines producing about 800 bottles each year which are auctioned off for charity.

Place du Tertre: The biggest disappointment of my trip. It was filled with restaurants more than artists and was so crowded, it was difficult to move. Much more commercial than last time and definite changed for the worse. 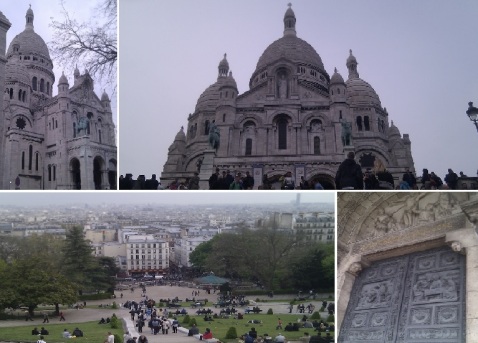 After about 90 minutes or so (during which time I actually lost my map), I headed out of Sacre Cœur and into a quiet side street for a spot of dinner and a much needed period of ‘settling’ and reflection. After a rather flustered afternoon it was nice to tuck myself into a corner table at Chez Marie and enjoy the ambience.

After dinner, I wandered back down the hill to Abbesses station, passing a ‘moulin’ or two along the way.

Reaching the station I boarded the train for Charles de Gaulle-Étoile aiming to cap off the evening by popping over to the Arc du Triomphe and taking a post dinner stroll down the Champs Élysées.

Thankfully that went according to plan and after walking off my 3 course dinner and wine, I returned to the hotel and collapsed into bed…

…but not before availing myself of a new map from Reception.