There has been much excitement at Gidday HQ today. Yes peeps, the ultimate in happy telly – the Great British Bake Off – is back. That’s ten whole weeks of signatures bakes, technical challenges and showstoppers to look forward to.

So this afternoon I raced home from work, got two loads of washing on and with dinner done and dusted, I curled up on the comfy couch just in time to enjoy the opening sequence, the white peaks of the marquee sweeping into view amidst swathes of green and accompanied by the familiar tinkling of the GBBO theme tune.

Week one was Cake Week and the twelve contestants (I always think that thirteen i.e. a baker’s dozen, would be more appropriate) whipped – and in a lot of cases rewhipped – their way to a drizzle cake, produced a passable batch of Jaffa cakes and showcased the art of mirror glaze.

There were winners and grinners, triers and even a few fliers with Candice piffing her genoise sponge across the tent. The first Star Baker was announced and someone else’s spatula was despatched to the back of the GBBO cupboard. It seems that a nice weekend in the countryside (albeit a rainy one in what amounts to a big tent with nineteen strangers plus a film crew) and a judge’s nod to being one of the top twelve bakers in the nation pales quite a bit against the ignominy of being the first one to leave.

It’s probably a little early to be laying claim to my favourites but cool Selasi (could he be any more laid back?), pragmatic Jane and brave Benjamina were the ones that won my heart this week. How did they fare? Well there is a strict no spoilers policy here at Gidday from the UK so my lips are sealed. Unless of course there’s cake involved.

Speaking of cake, I pushed the boat out for a birthday bake earlier this month. A forage through the pages of my More Secrets From The Beechworth Bakery cookbook unearthed a recipe for Dutch Apple Cake so I set forth, wielding my spatula and turned out a veritable treat… 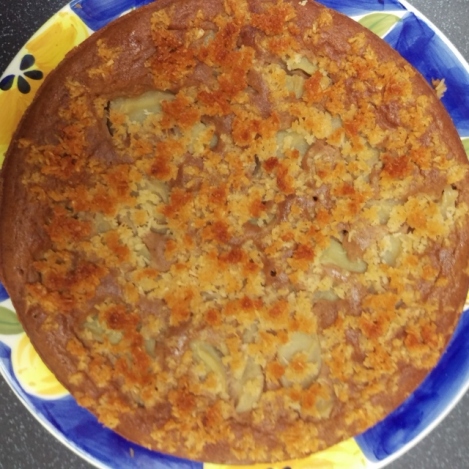 My delicious Dutch Apple Cake: full of sugar and spice and all things nice and fattening!

…which was rapidly demolished by my workmates the next day.

Just when I was thinking my hips were safe again, there has been talk of an Office Bake Off. And next week the Great British Bake Off brings us Biscuit Week.