I had an hour to kill between meetings near Pall Mall today and as I braced myself against the cold (it was -1 Celsius for most of today) and crossed Trafalgar Square, the imposing pillared facade of the National Gallery and the promise of its warm – and free – galleries looked pretty inviting.

In the thirteen years that I’ve lived in London, I have never been to the National Gallery (I know, the shame!) so once inside, I followed the signs up to the paintings galleries and began to wander. I had such a lovely time that I wanted to share a few of my favourites with you.

Let me pause here and say that I am in awe of the skill and talent required to paint. But I know diddly-squat about art and on the rare occasions that I go (like to last year’s Painting the Modern Garden at the Royal Academy), I tend to stroll around and stop whenever something takes my fancy.

And I was only just inside the door when I was taken by fancy number one.

I’ve never heard of the artist – Luis Meléndez, a Spanish still life painter from the 18th century – but apparently he painted almost fifty of these ‘bodegón’ paintings between 1759 and 1772. What drew me to this one was that I had to suppress the urge to reach out and feel the texture on the wooden boxes and dimples in the skin of the oranges with my fingertips.

(This photo doesn’t do it justice but actually none of those I’ll share measure up to standing in front of the real thing. We’ll just have to make do with my happy snaps.)

I moved into the next room and as I turned to look at the paintings on either side of the door I gasped out loud. This is Italian painter Canaletto…

Canaletto – Venice: The Basin of San Marco on Ascension Day (about 1740)

Canaletto – Venice: A Regatta on the Grand Canal (about 1740)

The first painting is of a place I’ve visited several times and I’ve been fortunate enough to take a few trips across this very stretch of water – admiring the tower of San Marco in Venice with the Doges Palace (the pink building) in front of it – over the years. The second painting is also a scene from my travels but what struck me more was its extraordinary detail. All of the people seemed to mill around and the intricacy of the architecture and decoration on the boats made this scene come alive in a cacophony of colour and apparent movement.

What I thought was interesting was that these paintings looked bland when I saw them from a distance and it was only when I stood up close that they came alive. I returned to look at them again before I left – I was awestruck by the skill Canaletto must have had to create these in such wonderful detail.

As I wandered aimlessly through each room, I enjoyed Constable‘s peaceful country scene in The Hay Wain…

…and was delighted to see a less flowery side of Claude Monet. While I love his Water Lilies and have been to Giverny to see both his studio and the glorious garden that inspired him, I found myself enchanted by the moodiness in this depiction of the Gare St-Lazare.

Speaking of being delighted by a new and unexpected perspective, this painting – called Two Crabs – gave me a whole new appreciation for van Gogh.

I quite enjoy van Gogh’s paintings but I’m sometimes disappointed by the lack of realism in them. The colour of this canvas caught my eye from across the room and I was both intrigued by the detail up close and really surprised to find it was one of his.

Staying with Cezanne, I was intrigued by the theme of bathers in several paintings and how differently this was portrayed. Compare the densely-coloured canvas below from Cezanne…

…with this earlier and ‘lighter’ canvas from father of pointillism, Georges Seurat.

Seurat used tiny dots of contrasting colour to create this vibrant effect. It’s most impactful when standing back to admire it versus getting close to look at details (like with the Canalettos I mentioned earlier). I did get up close though to check out the dots for myself, despite the group of twenty or so school children sitting in front of it at the time.

Another name familiar to me was William Hogarth – I had come across his sketches on a couple of walking tours I did last year. This was my first look at his paintings – his Marriage a la Mode series was on display – and I really enjoyed his witty ‘fun-poking’ and action-packed canvasses. This is No. 4 The Toilette showing a woman getting ready for her day in the ‘privacy’ of her bed chamber.

By the way, don’t you think the man on the left with the open book looks a little like Rowan Atkinson? 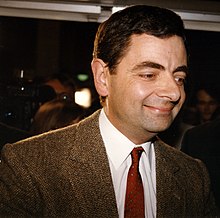 Anyway the final painting I want to share with you is by someone I’d never heard of – Laurits Andersen Ring. Born Laurits Andersen in Ring in Zealand, Denmark, he was apparently well-known for roads and paths in his paintings.

All I knew was when I set eyes on it, there was something inordinately peaceful about this stark snowy scene and I hovered around it for some time.

By then, an hour had flown by and it was time to head off to my next appointment. But what a marvelous way to spend a bit of time between things…and all for free. I must admit to having a little spring in my step as I crossed Trafalgar Square again despite the bracing air outside.

I do love living in London.

2 thoughts on “A brush with art”