They say that you can prove anything with statistics.

The Times reported yesterday that ‘$200 a barrel for oil [will] hurt and squeeze spending’ for households (no sh*t Sherlock!) and earlier in the month, The Economist used The Shoethrower’s Index to determine the potential for unrest in the Arab World – apparently Yemen is ‘Top of the Pops’ here, right ahead of Libya.  In other news, Michelle Williams wore the ‘most loved Oscar outfit’ according to Friday’s Metro – with Aussies bastions of style Nicole Kidman and Cate Blanchett occupying the first and third rungs on the worst-dressed ladder respectively – and the National Trust informs us in the latest edition of their member magazine that a ‘large-beach-towel-sized’ area of coastline costs £52 a year to maintain (and there’s room for 624,800 of said towels!)

But what do statistics really prove?

One of the cool features of having a Blogger account is that there is a stats area where you can check out things like daily and weekly visits to your blog, most popular posts and where your visitors are coming from. 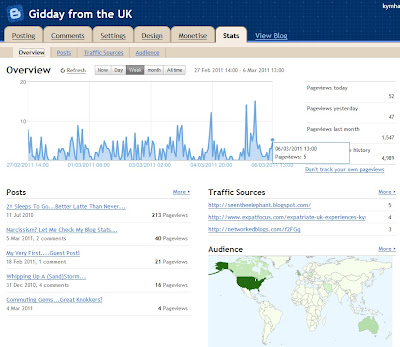 It’s quite addictive as you can click on all the ‘Mores’ and get more fascinating detail to pore over like the most popular post/s and where your audience is located.  But I am often mystified by how it all works.

For example, I am Australian with family and friends in places like the USA and the United Kingdom, and I have recently posted about an expat Russian accordionist who lives in South Korea so these nations being near the top this week makes sense to me…﻿
﻿﻿ 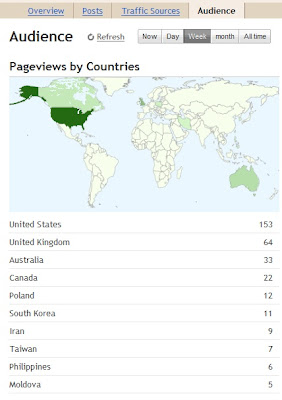 ﻿﻿﻿﻿﻿﻿﻿﻿﻿﻿﻿﻿﻿﻿﻿﻿﻿﻿
Is this what is meant by the Global Village?  Maybe they are just being neighbourly and are stopping by to borrow a cup of sugar…after all, my most popular post is about The Art of Latte!