First things first – you might be wondering about the title of the post. It’s not meant to suggest that I have been an armchair traveller – as you know I like to get out and about and see what there is to see. But I’ve had a few people leave comments or send messages that, in reading some of my wanderlust-themed posts (Nuremberg and Prague to cite a couple), it’s like they get to visit without leaving their armchair. This is another one of those posts. If you are not in the mood for a meander, you should read something else.

This week’s small lull between the festivities of Christmas and the euphoria of New Year’s Eve means that Londoners aplenty have availed themselves of the opportunity for rest and relaxation (or a little sale shopping but I digress). Which means that the actual City of London is pretty deserted at this time of year – a  golden opportunity to mosey around free from the usual tyranny of the booted and suited.

My ultimate destination was the Museum of London, a museum I have not visited since I first ‘got off the boat’ in 2004, and one of my favourites. But the empty streets tempted me and I spent a little time meandering, fascinated, along London Wall.

London Wall is a street that runs through the City of London (also known as the Square Mile) that is located along the course of the first defensive wall that the Romans built around the beginning of the 3rd century AD.

On a quiet, traffic free day, it is easy to take photos and absorb a little of the atmosphere of London’s Roman past:

…and when I emerged at about 4.30pm, the day had dipped its lights in deference to the night. As it does here in London during December..and November…and January.

So this is what happened walking back to Moorgate:

And so with London’s guardian of the realm at my back it was time to board the bus and take my weary legs and aching feet back up north to my cosy flat and a hot bath. But not before a final snap from the bus stop…

We are so busy rushing to the destination sometimes we often forget that the getting there can be just as fabulous. In case you’re wondering, this is where I went: 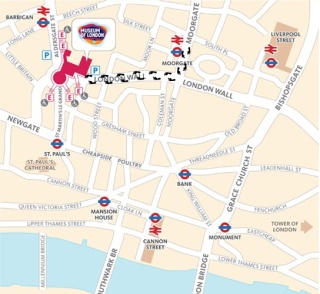 So much to see in such a short walk.

And here endeth the tour.