So yesterday I told you all about the journey, leaving you with the adage that the getting there is often just as fabulous as the destination. 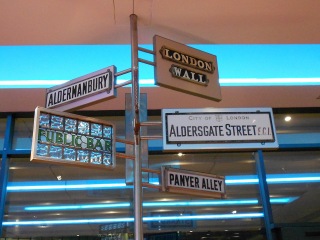 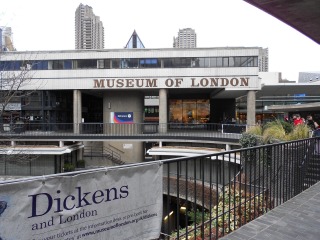 I arrived at the Museum of London, eagerly anticipating a couple of free hours of strolling through time. The Museum is laid out in chronological order and is quite interactive with fewer than usual items of the ‘do not touch’ variety. Prior to entering the permanent exhibition there’s also a display called London and the Olympics which celebrates the Games already held in London (1908 and 1948) as well as the 2012 preparations.

The journey starts with an exploration of the region from 450,000 BC before London was…well London. The locations of significant archaeological finds are also showcased – places like the site of the current Heathrow Airport – as well the work along the shores of the Thames where FROG volunteers from Thames Discovery continue to catalogue new finds to assist in preserving London’s rich history.

From 50 to 410 AD, the Romans built, defended and rebuilt Londonium – there are some great displays of homes, shops, food and the opportunity to peek at the defensive City wall from another perspective.

We then move to Medieval London and the galleries which showcase the period from 410 through to 1558 AD covering Viking raids and the emergence of Anglo-Saxon power right up to the early Tudor years. This gallery also shows much of the religious development of London and features a model of the original St Paul’s Cathedral.

The next gallery take us on the path of London’s devastation through civil war, the plague and fire. I was fascinated by the survival of London at the end of this period in spite of the loss of between one third and one half of the population to the Black Death, followed by the loss of some 13,000 homes (but only 9 lives) in the Great Fire of 1666 the following year. It took London 50 years to rebuild including Christopher Wren’s reconstruction of St Paul’s Cathedral as we know it today.

I followed the arrows downstairs to the next set of exhibitions entitled Modern London: Expanding City. 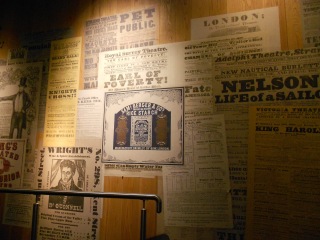 A main feature of this gallery is the recreated Pleasure Gardens which allow you to wander, sit and watch the cinematic story of the time unfold on the screens around you. The hats on display were…interesting. It must have taken incredible posture to manage these with any grace and dignity.

Just down the ramp from the Pleasure Gardens there was an arcade walk to celebrate the Victorian era.

Next we move into the late 19th and early 20th centuries in Modern London: People’s City. The class divide is brought to life by an interactive version of Charles Booth’s map of poverty in London which sits opposite a vintage motor display, a recreation of the entrance to the Savoy Hotel and panelling from the Selfridges lift which was installed in 1928.

The final step in time is Modern London: World City which takes us from pre WWII London, through the fab 50s and swinging 60s right up to today.  This was a busy gallery so I was frustrated in my attempts to take pictures and despite cases filled with fashion, music and even a real life Vesper, I managed this one only.

There’s a room off to the side of this exhibition called the City Gallery which contains the Lord Mayor of London’s official coach which leaves the gallery each November (since 1757) for the Lord Mayor’s Show.

So after two and a half hours I emerged into the dark evening thinking ‘well that was that’ – only to find a special installation in the windows outside.

The London Cityscape by Simon Crostin was commissioned by the Museum of London to commemorate the 2012 bicentennary celebrations of Charles Dickens in conjunction with the Museum’s exhibition, Dickens and London, running until June 10, 2012. 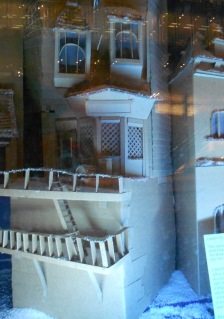 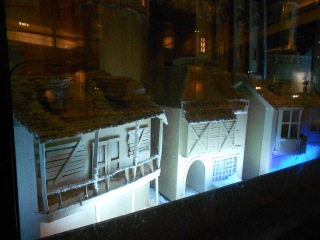 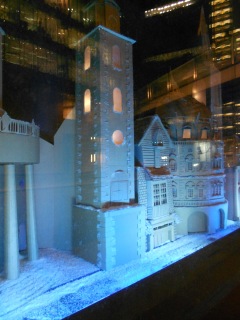 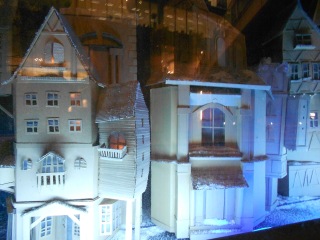 I wandered slowly back to Moorgate along the raised walkways around St Alphages, still snapping away (as my previous post will attest to). And as I finally sat, homeward-bound, on the top deck of the bus, I marvelled at the fascinating snippets I’d learnt about London’s chequered past and felt a quiet contentment at my big day out and the historic city that I’ve chosen as my home.

2 thoughts on “Destination…Museum of London”