After travelling for the last couple of weeks for work, on Friday night I was looking forward to a quiet weekend, catching up on a few chores and squeezing in a bit of chilling out. But in actual fact, Saturday became one of those days that kept unraveling and unfolding as the day progressed.

After a slight over-sleep (meaning no chores pre-departure), a planned catch up with A-down-the-hill prior to a regular appointment at the hairdressers developed into somewhat of a larger day and after an impromptu movie matinee (Sherlock Holmes: A Game of Shadows if you must know, and yes it was great!) I found myself at a Ceilidh.

A Ceilidh, pronounced ‘kay-lee’, is a traditional Scottish knees up, comprised of kilts, whisky and haggis. But mainly, it is about dancing, informal, fast-and-furious, ‘catch your breath between sets’ kind of dancing. So it’s just as well I had come completely unprepared for a night out – flat boots, jeans, long sleeved t-shirt and not a scrap of make-up – because before long, I was sweaty and ‘unkempt’, and absolutely loving it!

We arrived with A-down-the-hill’s Scottish contingent (McHubster is from north of the border you see), snaffled a table and the boys went off to queue for drinks and a spot of haggis. I had grand intentions getting my vegetarian haggis later in the evening but, well, I got rather busy. You see, the music started and the caller invited everyone to take the floor. After a walk through of the dance – usually comprised of a series of steps set to 16 bars which is then just repeated – we were off. And that’s pretty much the way the night went…all night. 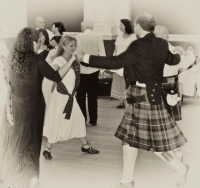 The first dance was The Gay Gordons (don’t ask!) and then a little into the second dance, I was delighted to find I had just renewed my acquaintance with The Virginia Reel, a dance I learnt in primary school.

Three and half hours flew by. There was The Dashing White Sergeant, Strip The Willow, The Flying Scotsman, The Canadian Barndance, The Eightsome Reel and a few that we didn’t catch the name of, made stuff up (because we had no idea what we were doing) and had a laugh anyway. The haggis was piped in (and I do mean bagpiped) half way through the evening and Burns’ Address To A Haggis read with due ceremony, much theatre and sense of occasion (for those of you who don’t know, Burns’ Night falls this Wednesday on January 25th).

It was a fantastic night – young and old alike took the floor and it was a refreshing change to see the guys itching to get onto the dance floor to strut their stuff. There was a sense of joyful abandon in the hall – maybe the flow of whisky helped a little – but this was just a great, old-fashioned knees up and the best thing to do was leap off the deep end and give it a whirl.

If you are interested in finding out more you can click here for upcoming ceilidhs in London and here if you feel you really must swot up on a few of the steps.

But there’s really no need…sometimes a little improv. makes the best fun of all!

2 thoughts on “A Highland Fling…”