For those of you who’ve been following Gidday for at least this year, you may remember I told you about my first sortie into the world of English football, in particular my visit to see Arsenal play Aston Villa at Emirates Stadium in the 4th round of the FA Cup. Arsenal won and I managed to have a jolly good time so it was thumbs up all the way round.

Well would you believe that I’ve been back already? After 8 years in London, I have managed to grace the Gunners home turf with my presence twice in 2 months but this time it was from an entirely different angle. I did The Stadium Tour.

As part of a Charity Dinner I was attending at the end of March, the tour was offered for those wishing to turn up early and get a sneaky peek behind the scenes of one of London’s newest football stadiums.

We headed out from the function area in all our finery and followed our guide, Colin, to the other side of the stadium. Here’s the view from the expensive seats: 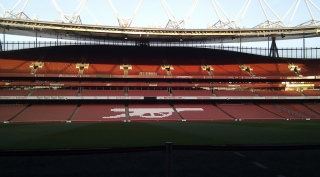 We didn’t hang around here though – it was off to have a gander at the Players’ Entrance.

Interestingly, the players get hit smack bang with a big red wall the moment they arrive, just in case there’s any doubt what they are here for.

…and also a time capsule placed in 2004 when the stadium was officially named.

Colin then took us to the Players’ Change Rooms where we all got a little feng-shui’ed.

This is where the players change (obviously) and where Arsene Wenger briefs the team. The room is a horse-shoe shape (apparently corners are not great for Feng Shui) with every player considered equal. All sit in their allotted places every time: the defenders sit together, the strikers together and so on. The goalkeeper always sits closest to the entrance/exit and the Captain occupies the middle of the horseshoe’s curve (see Van Persie’s shirt in the picture above).

The middle table is low so that all players can see each other easily when seated. Colin is not a tall fella and as you can see, it only came to waist-height on him. (Sorry if you are reading this Colin.) 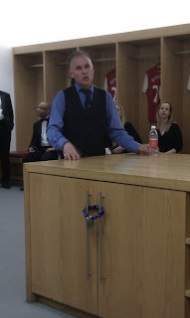 We then had a sneaky peak at the Away Change Rooms. Funnily enough, the room is rectangular and you might like to check out the height of the table…

Before we knew it we were heading out to the pitch…

…and into the dugout. 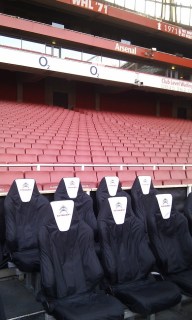 Citroen sponsor this area so the seats are specially designed…and very comfortable.

Arsene sits in that front row seat on the right. I happened to sit there without any prior knowledge of this fact (power attracts power maybe? I’ll bet all the Gunners fans on the tour were gutted I got pole position) so I thought I should let you know what the Wenger view was like…

I know. It doesn’t look that much different compared with the view from the expensive seats higher up.

Anyhow, we were making good time and the next tour group from our do was gaining fast so we managed to squeeze in a visit to the Press Conference room.

The Away Team Manager always gets the first gig after the match here. 25 minutes then he’s off and Wenger takes the chair for 25 minutes. It’s the Press Officer’s job to make sure there’s no over-running.

In the neighbouring corridor there are a number of rooms used by radio and TV channels for post-match interviews. You know when you see a player interviewed in front of a wall with all of the sponsors names on it? Well that’s all it is…

Champagne o’clock was nigh and not wanting to risk the wrath of his thirsty guests, Colin led us back around the stadium to finish the tour. I know the photos start to look the same but I just had to take one more cheeky snap.

You can actually take an audio guided tour of the Stadium yourself rather than wait for an invite aligned to a posh function like I managed. You can also combine it with a visit to the Museum (which I didn’t get to see so you’ll be one up on me!)

I have to admit that it will never have the awesome magnificence of the MCG – they are just enormous shoes to fill. And I’m not a follower of English football (as we have established in my earlier post). But given that it’s an intrinsic part of England’s sporting culture, it was fantastic to feel the ‘passion of the game’ brought to life for the second time this year in Arsenal’s hallowed halls.