There are times in this expat life of mine that I discover something that I think is so random and nonsensical that there is nothing for it but to shake my head and laugh.

This week, I learnt about Premium Bonds.

Premium (or lottery) bonds were introduced by Harold MacMillan in 1956 as part of the government’s National Savings and Investment Scheme. This is how they work:

1. You pay some hard earned cashola for a bond. You can sell this back to the government, at your request, at the original price you paid. No more. No less.

2. The government pays a return on the bond but not to you. Instead it goes into a central prize fund.

3. A monthly lottery distributes premiums to those bond-holders whose numbers are selected randomly.

4. The machine that generates these random numbers is called ERNIE. I kid you not.  It’s acronym of Electronic Random Number Indicator Equipment.

5. Your chances of winning (according to the Premium Bond Probability Indicator on moneysavingexpert.com) are as follows:

After all, what could be a sounder investment choice than essentially putting a down payment on a whole lot of future lotto tickets? 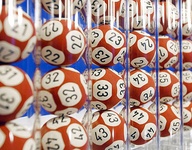 But really, who am I to quibble about such things: apparently one in three Britons invest in them.

All I have to say is “The very best of British to them!”

8 thoughts on “The Very Best of British …”