Rome is chock full of churches. Every corner you turn there’s another one, beckoning you into its cool, placid interior. So a trip to the Eternal City would be incomplete without a few worshipful visits – and, given the number of ‘working’ churches – more than 900 according to wikipedia – probably unavoidable. And as they say, when in Rome…

Firstly let me say that I did the Vatican Museums and St Peter’s all those years ago on my first visit so I had already deemed a visit there unnecessary. And while I visited more, the three featured here sum up the impact of my religious experiences during the 4 days.

I’ll start with the Pantheon which stands proudly facing the Piazza della Rotunda. From the outside, it looked like all the pictures I’d seen in books and while not top of my ‘must cross Rome to see’ list, I was there, the day was warm and its shaded portico beckoned.

Nothing prepared me for the interior. 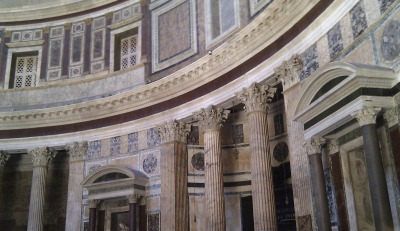 I emerged again into the bright sunlight, feeling the heat on my skin after the cool under the Pantheon’s great dome. After a quick peek at Tazza D’Oro (famed for its coffee but lacking appeal for little ol’ moi with a line of customers extending out the door) and a watering stop at the fountain (you can drink the water from the majority of Rome’s fountains so my water bottle had a real workout), I continued my south-bound meander towards Gesu (more on this further on).

My next stop was completely unplanned and brought on largely by a desire to get out of the heat. (A girl has to pace herself you know – I’m not used to all this 30C plus weather any more and I had a whole 4 days of it to look forward to.) Santa Maria sopra Minerva dates from the 13th century and was built over the ruins of the Temple of Minerva. The piazza is marked by an unusual inhabitant…

Once inside, the mix of Gothic architecture and Renaissance and Baroque styles is stunning. The cornflower blue of the vaulted ceilings didn’t come out so well in my photos but I’ve includes some other faves here for you. 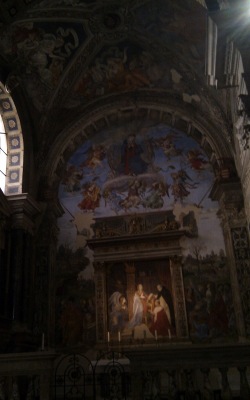 I left to brave the heat again, quietly delighted at my unexpected moment of enchantment here. I set off southwards again, my destination this time being Gesu. Unfortunately, I arrived during closing hours so I returned the next day after re-checking with my trusty Eyewitness Travel Guide that this was worth making the diversion to the same area again.

It was. Just check out the photos below. 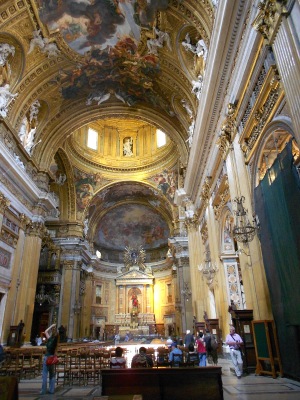 I was completely overwhelmed. This really is a beautiful church and anyone coming to Rome must visit (but make sure you don’t turn up between 1.30-4.00pm). I could have taken many more photos but actually spent time sitting, moved, by what I felt around me. It was a poignant and quite spiritual experience just being there.

I remember feeling overwhelmed by the detailed magnificence of the Sistine Chapel when I visited in 2000 but for me, there was a spirituality, albeit different, in all three of these beautiful churches that the Sistine Chapel didn’t have.

The Pantheon for its glorious space and simplicity.

Santa Maria sopra Minerva for the sense of discovery and enchantment.

And Gesu for its breathtaking colour and artistry – and for touching my soul.

2 thoughts on “A Holy Trinity…”