In the absence of any stimulating TV last night, I watched an Australian documentary series by Joe Hildebrand exploring the reputation of Australians overseas. Hildebrand is a journalist for The Daily Telegraph in Sydney and appears on a variety of TV programs sparking much controversy and debate with his outspoken and provocative views.

Prior to yesterday, I’d never heard of him. But I was catching up with a friend I have not seen since high school and over a glass of wine and a bowl of pasta, we were talking about how Australia has ‘changed’ and more specifically about the ‘race riots’ in Cronulla (which are still so viceral in the minds of Australians that when my friend mentioned them, I thought there had been something more recent than 2005).

Anyway the series, called Dumb, Drunk and Racist, follows the experiences of four Indians invited to take a road trip with Hildebrand to experience the best and worst of Australia. 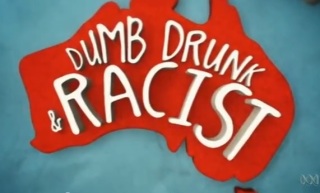 The prevailing view in India is that Australians are rude, racist, dumb and drunk to the point of embarrassment, irresponsibility and violence. So Gurmeet (a journalist/ newreader), Radhika (an education advisor), Amer (a law student) and Mahima (a call centre worker) all agreed to face their preconceptions and, for some, fear of visiting the Land Down Under and to share their views on what they experience .

http://youtube.googleapis.com/v/khRP_MPI8sA&source=uds
Warrning: Before you play this, much to my embarrassment you should know there’s some shocking language in this trailer.

If you think this trailer is bad, the series is worse. And in some ways better as the generous foursome end the series with a much improved view of Australians having witnessed the hard-working, warm and generous people who are at the heart of Australian communities, both in suburbia and in outback towns. But more often than not, I cringed as I watched, horrified at the boorish, narrow-minded Australians that have become the basis of our reputation in the wider world.

While I don’t believe that the majority of Aussies behave like this, the behaviour of a few is tainting the perception of the whole and I am concerned that Australia, with its ‘she’ll be right’ mentality and sense of entitlement to a land we took from others in the first place, will not really address this.

Our lucky country has never dealt with terrorism, attack or even real economic crisis when compared with the rest of the world so as a nation, we’ve never had to fight for or fear very much.  Maybe our literal isolation from the rest of the world (and from each other – Australia is a spacious place by anyone’s definition) creates a feeling of safe-ness, the urgency of doing anything dissipating in the absence of any trouble on our doorstep. We have a view of our laid back attitude as rather lovable and fun but perhaps it actually hides an unwillingness to step up, ‘rock the boat’ and demand change.

In saying all of that, it was heart-warming to see the surprise and delight of the four travellers at the Australian sense of fun and open-ness – there’s a really gorgeous moment between Mahima and a local when, obviously quite taken with her, he follows ‘pleased to meet ya’ with ‘would ya like a beer?’ and then proceeds to order her purple PomPom drinks, to her absolute delight.

The spirit of community that emerges in our country towns and our tolerance for lifestyle choices taboo in India is also lauded and in spite of the nastiness throughout the six episodes, I found a lot to be proud of.  But it was still hard for me to watch these gentle and intelligent people being abused by foul-mouthed locals. That we are not the only nation facing these kinds of challenges matters little.  For all our easy-going tolerance, there comes a time when a line needs to be drawn.

And the time is now.

————————————-
Most of the series is available on youtube if you are outside Australia and cannot access ABC2.