I saw someone post on Facebook this week that people who only have happy positive status updates were not being completely honest – that sometimes life is just a bit sh*t.

After an amazing couple of weeks where I got promoted, had a birthday and generally felt lucky, humbled and a bit like I was floating on air, I’ve come down to earth with a bit of a thud.

So in the interests of having a good moan balancing the scales, here it comes.

It all started with a second rubbish night’s sleep in a row as my back grumbled and groaned through the early hours after a pretty ‘robust’ acupuncture/ massage/ cupping session on Saturday.

A bad night’s sleep is NEVER good…and also one of the many reasons I don’t have children.

Anyway I fronted up to the train station this morning to buy my weekly travel card only to have my debit card declined. Upon further investigation, it transpired that my card had actually been cancelled by the Fraud Team (FT) at my bank…last Thursday (today is Monday). While I’m all for taking steps to ensure that some bugger doesn’t empty my funds albeit meagre from my account, a notification (like a text message or phone call which said bank seems to use at will for a myriad of other occasions) would be nice. Let me tell you, I can think of a few other words FT could stand for.

Needless to say, I held my breath as I waited for the credit card from my ‘other’ bank to clear the funds for my ticket.

I arrived at the office, looking forward to a quiet moment with my coffee to ease into the busy day ahead. I opened my email to find that the person from our Russian office who was to join us for 6 months to cover a colleague‘s maternity leave from today was refused entry into the UK and shipped back to Moscow on a flight at 8.50 this morning. Oh crap crap crap!

Then mid morning I placed a call to my local medical centre to follow up a referral from an appointment 3 weeks ago. After having to explain several times that I wasn’t chasing the results but the referral and asking for the letter to be re-faxed (as I had been asked to do by the nurse), I was given a number to call to get a name so that the fax could be addressed to a specific person for me to follow up.

On the best of days, this convoluted sort of process tests me. Today…

…and to make matters worse the number I was given didn’t connect, so I had to ring back and explain everything again. Apparently I was going to get a call back this afternoon…

Finally I left the office. I had a physiotherapy appointment booked (for said grumpy back) so I got to the station in plenty of time…and managed to get on a train that didn’t stop at my station. The lovely train station lady at St Pancras did let me get back on a train going the other way 15 minutes later (instead of fining me for not having a ‘valid ticket for travel’) and I did get home in time for a quick change of clothes before my appointment so you could argue that things were starting to turn around.

But quite frankly it was a day I could have done without.

I know that there could have been a lot of other, much worse things to deal with than my litany of inconsequential irritations. But it just didn’t feel like I could catch a break. So I figure that tomorrow’s got to be a better day… 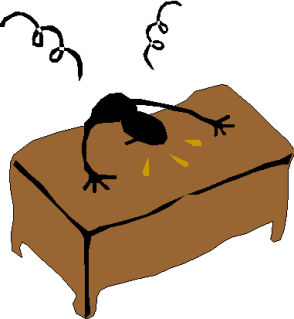