I’ve been living in London now for more than ten years and lately I’ve been thinking about forking out some of my hard-earned pounds for British citizenship.

I have no plans to make my home elsewhere. I’ve blogged before about my pride in the life I have built here and I still love London. Yet there is a part of me that wonders whether some change in legislation or circumstance might result in my losing my right to live and work here (for the uninitiated, this is called Indefinite Leave to Remain in the UK).

With all of the travelling that’s been going on of late, I love nothing better than coming back to London’s grit, its hustle and its stiff upper lip-ness – things that I never thought I’d love given the qualities I miss most from Down Under are our laconic ease and quintessential directness. And my London friends tell me that I’m still identifiably Australian.

But in the last few weeks, meeting new people has been met with ‘You sound English – but there’s a twang in there? Where are you from?’ as opposed to the previous ‘Are you from Australia or New Zealand?’

Back in June 2011, I read an article in the Australian Times which asked Are You Losing Your Australian-ness? and at the time, I identified two things:

1. I was about 41% of the way along the list of 12 steps indicating British-ness.
2. That British-ness would overtake me after about a decade.

So it seems that the article was true to its word – linguistically speaking that is. But as we Australians can maintain our Aussie citizenship and hold a British passport, it’s not like I have to relinquish everything. It will just be that my divided heart will be manifested in dual nationality.

Life has a funny way of throwing one a curve ball and while I might be sitting in the dugout waiting for the next ‘batter up!’ (I’m in America at the moment so please excuse the additional third-cultural reference), previous innings have shown that it’s best to be a little prepared.

So it means I have to fork out some cash and get a few details together…like details of the last five years of travelling…to complete my application. 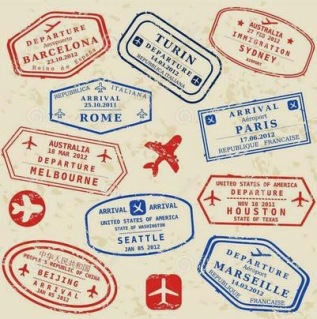 …because quite frankly, this is just the tip of the iceberg!