You might think that the British are a modest bunch. Not for them the brash competitiveness of the Americans, the super-styled ‘look at me’ of the Italians, the colourful flamboyance of the Brazilians or the voluble national pride of the Indians. No, Brits are self-effacing, stoic types who enjoy a moan through their stiff upper lip much more than a me-moment.

The proliferation of ‘Great British’ television shows might suggest otherwise and whilst singing contests for warbling amateurs demonstrating their vocal chops have long been a fixture of reality TV, a range of more everyday pursuits have found their way into our living rooms.

To my mind, this spate of TV DIY-ness began with The Great British Bake Off.

For the uninitiated, a group of home bakers compete in a flurry of flour, butter, eggs and sugar to win the title of Britain’s Best Amateur Baker. The series began on BBC2 in 2010, when Britain’s recession forced wallets closed and people indoors. Five series on, GBBO has reached both BBC1 and an average viewership of more than 10 million (up from 2.7 million in Series 1). It has spawned spin-offs such as Junior Bake Off, The Great Comic Relief/Sports Relief Bake Off (2 series of each so far – the Comic Relief version is running at the moment) and segued jauntily into 15 other countries – I’m thinking that Denmark’s The Great Baking Joust (Den Store Bagedyst) sounds like quite a competitive arena versus the British Bake Off tent that I know and love. Series 4 attracted more than 10,000 applicants and 2014’s Series 5 was accompanied by An Extra Slice where the latest departures could lament the justice of their elimination.

The series has been credited with reigniting the public’s love of baking and I count myself amongst this number. During said recession, finding a relatively low cost hobby to keep my hands busy and my mind off the financial challenges my circumstances had brought to bear provided many moments of simple and joyful accomplishment. And I find nothing more enjoyable (well, maybe a gutsy red wine with some great cheese) than curling up on the comfy couch after a hard day at the office for a little armchair judgement of a dozen spatula-wielding amateurs.

It would seem that success breeds….well copycats. And every time I turn on the telly, there appears to be yet another amateur home-challenge to be taken on.

2015 has already given us the third series of The Great British Sewing Bee. It’s a similar format to GBBO with ten sewers (yes that’s what they are called – an unfortunate homographic coincidence and should be pronounced so-er) judged by experts from The Women’s Institute and from Savile Row for their worthiness to the claim of Britain’s Best Home Sewer (now remember the pronunciation peeps). Contestants stitch their way through three challenges – Pattern, Alteration and Made-to-Measure – to produce, among other things, necklines, patch pockets, men’s shirts and evening dresses. It appears to be gathering momentum with the number of episodes doubling to eight for Series 3.

Then there’s The Big Allotment Challenge, again from the Beeb. Series 2 has just concluded with nine budding horticulturists taking on six weeks of Grow, Make and Eat challenges in the heart of the English countryside. This enterprise takes a bit more long term planning for the chosen green-fingers-and-thumbs (4 months) – even I know that it takes longer than a few episodes to grow a bounty – and as a bonus, throughout the series you could download each contestant’s plot layouts if you felt particularly inspired to ‘allot’ for yourself. In case you are wondering, I did not, despite my efforts to cultivate a little self-sufficiency with a Gidday HQ patch at a previous time and location.

And then The Big Painting Challenge starts tonight with week one’s theme – landscapes – to be painted at Hogwarts (aka Alnwick Castle, Northumberland). Ten amateurs will pit their paintbrushes against each other to be crowned Britain’s Best Amateur Painter where the glory of winning  the title seems to hold significant appeal. Consider this: the show attracted more than 6,000 applicants against the Sky Arts Landscape Artist of the Year (previously Portrait Artist of the Year)  which offered the winner a £10,000 commission (and which is added to the National Trust‘s permanent collection) and a previous show, BBC2’s defunct Show Me The Monet, giving the winning artist the chance to sell their works in a London gallery.

So despite the self-effacing stereotypes that abound, these shows suggest that the Brits do like a contest and that the glory of a title is enough to encourage them off their couches and into their kitchens, sewing rooms and the great outdoors. This may not be surprising when you consider that titles still ‘matter’ here and ‘lordship’ is bestowed on those not born to it on what seems to be a pretty regular basis.

Rumour has it that the next in the BBC’s arsenal of challenges is one for the angler – travelling around the world to prove themselves across a range of fishing locations and techniques. It just might be worth watching this – after all what could be more entertaining than to see who will be crowned… 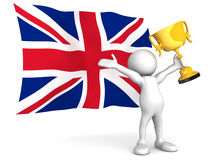 8 thoughts on “The Great British Boast Off”