I’ve had an extra couple of days off to extend my Easter into a 6-day break and it’s been a lovely mix of lolling about at home and getting out and about to explore more of this amazing city.  As some of you know, the Museum of London is a favourite of mine but this time I went to wander through the Sherlock Holmes exhibition (which finishes on the 12th of April – how did I nearly miss this?) 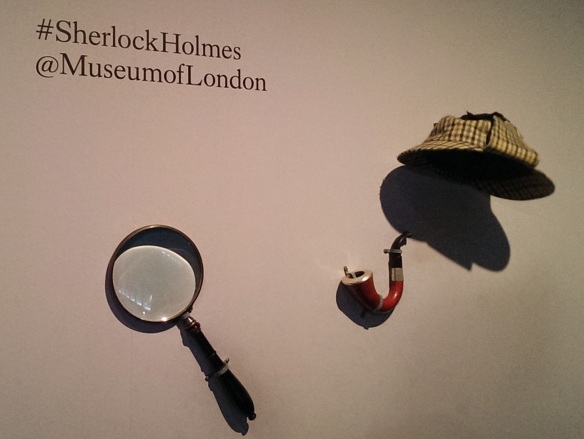 Detective Sherlock Holmes featured in the 4 novels and the 56 short stories of Sir Arthur Conan Doyle. Conan Doyle trained as a physician in Edinburgh in the late 1800s and also started writing during this period. He had limited success until the publication of Holmes’ first outing in A Study in Scarlet in 1886 with the sequel, A Sign of Four, published in 1890 while Conan Doyle was studying opthalmology in Vienna. He then wrote The Adventures of Sherlock Holmes and The Memoirs of Sherlock Holmes, each comprised of 12 short stories and elevating Conan Doyle to being one of the best-paid authors of the time.

But Conan Doyle was unhappy with the time ‘taken away’ from more serious writing pursuits and in 1893 wrote The Final Problem, plunging Holmes and Professor Moriarty to their deaths at Reichenbach Falls. But Holmes had taken such a firm hold in people’s minds that in response to public outcry, Conan Doyle resurrected his popular protagonist in 1901’s The Hound of the Baskervilles and continued to scribe his consulting detective’s adventures until 1927.

It is worth remembering that Holmes is a man of imagination – the imagination of Sir Arthur Conan Doyle. Conan Doyle created a quirky, impatient and sometimes unlikable character who loved the gossip columns and yet was in equal parts enthusiastic and dismissive of society and its pretensions; who could wax lyrical on criminal method and motivation yet exhibited such anti-social behaviour that at times, you might question how Holmes could have any insight into people at all. I wonder whether there was something in Conan Doyle’s interest in freemasonry and mysticism that brought an extra potency to his complex and quite frankly addictive protagonist.

Anyway, I love these stories and although I have not read them all, I have seen many of the TV adaptations starring the marvelous Jeremy Brett. So it was with Brett’s brooding portrayal in mind that I entered through the bookcase and spent just over 90 minutes wandering though both memories and memorabilia. 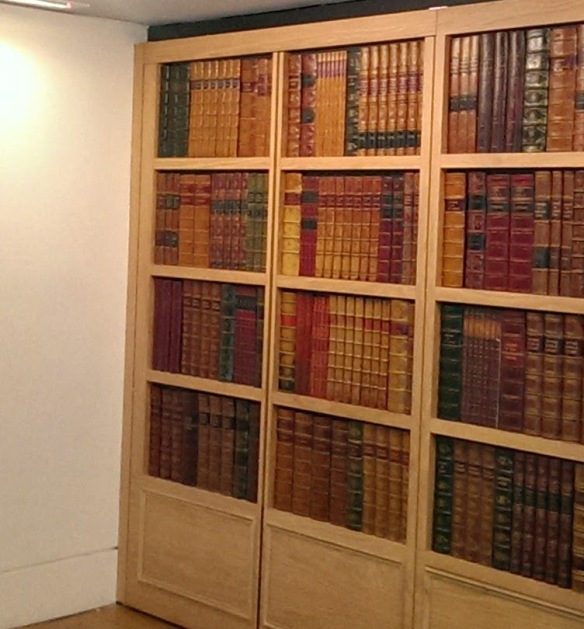 It was fabulous and I am now reading The Adventures of  Sherlock Holmes again.

Then yesterday I went to visit Churchill’s War Rooms. I’ve been meaning to do this for years and so I battled the Easter holiday hordes trundling along Whitehall and descended the steps beneath King Charles Street to the museum below. This underground labyrinth contains both the original War Rooms – left as if someone simply turned the lights off in 1945 and closed the door behind them, leaving everything just as it was – and the Churchill Museum, which covers this charismatic man’s entire life.

Like Holmes, Winston Churchill was a strong and opinionated character who fell in and out of the affections of his public. He was a committed politician and stood for office several times in his constituency and for the office of Prime Minister. He also wrote from the age of 21 to supplement his income and was awarded the Nobel Prize for Literature in 1953.

I feel devoutly thankful to have been born fond of writing. Churchill, Authors’ Club, London, 17 Feb. 1908

Had World War II not broken out Churchill may have been written off as a failure. Despite early popularity as a war correspondent and his escape from capture during the Boer War, he lost his position as First Lord of the Admiralty following the Gallipoli campaign and his opposition to home rule in India and support of the abdication of Edward VIII throughout the 1930s did nothing to restore his reputation. It was during this period that Churchill raised his concerns regarding the activities of Hitler and continued to warn against the dangers of appeasing such a man. His warnings went unheeded not only because of Churchill’s reputation as a war-monger but also due to Britain’s aversion to embarking on another ‘bloody’ war.

But circumstances conspired to create the right place and time and Churchill captured the public’s imagination by demonstrating his great passion for his country in his speeches – the words he wrote and then delivered into history:

There were many other speeches which stirred the nation and in fact the world, and Churchill went on to lead his country both during and for some periods after the war and to continue writing the pages of history until his death in 1955.

I consider that it will be found much better by all parties to leave the past to history, especially as I propose to write that history myself.  Churchill, speech to the House of Commons, 27th Nov. 1914

That two such iconic British characters can cross the divide between fact and fiction is quite extraordinary to me. While we will never know Sherlock Holmes (because he’s not actually a real person), the visit to the War Rooms made me wonder how much of the real man – Churchill – is about the ‘facts of the matter’ versus being inspired by the imagination. 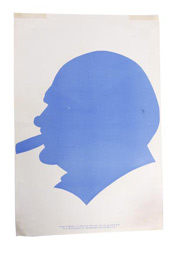 How do we ever know where the facts end and fiction begins?

1 thought on “Men of imagination”