Last September I ventured below London’s bustling surface to visit the site of a 4th century Roman bath and house. Back then the Museum of London were opening these archaeological sites as a trial to see if there as enough interest from the public in  getting up close and somewhat personal with London’s history.

There are now a whole raft of opportunities listed on the museum’s website so it would appear that the answer was yes.

Yesterday I spent an hour visiting another site from Roman London, the ruins of the fort lying underneath the busy city street of London Wall that runs outside the museum itself. I had seen this view from Bastion High Walk on previous museum visits… 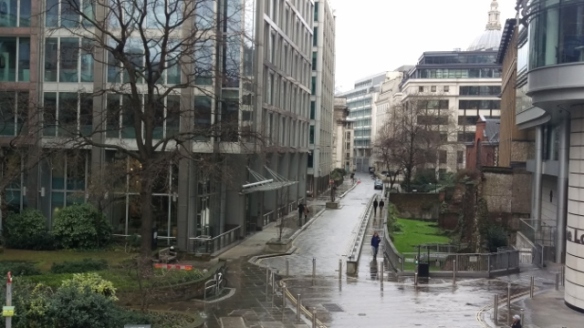 …but had never dreamed that there was any more to see. After spending an hour with Museum of London guide Mike, I was proved wrong.

We started up on Bastion High Walk just near the museum entrance with an overview of the site. This is Mike…

…and here are a couple of pictures from our handout. The left-hand picture shows the fort at the top left within the wall surrounding the City of London. The right-hand picture is the layout of the fort itself – the area we explored is in the middle of the outside left wall. 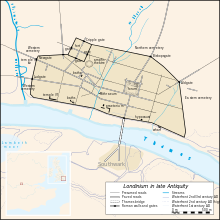 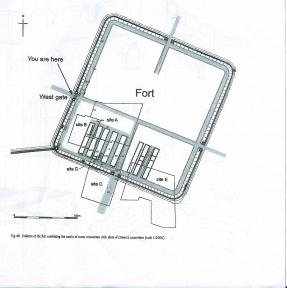 We headed down the stairs and along the slip road to examine things more closely. I love how these old sites are tucked in between London’s more modern buildings.

Up close we could see more of the detail – the soot blackened walls, the wear on the steps from the boots of the soldiers. 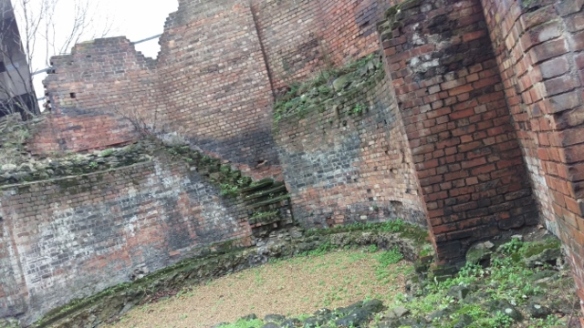 Mike pointed out this line of Kentish ragstone running along the front. This is the oldest part of the structure dating from the 4th century AD.

Can you see the two parts of the ragstone wall? The lighter-coloured part at the front would have been built first with the darker grey section added afterwards for additional fortification.

The rest of the site dates from about the 14th century when, in typical London fashion, new buildings were simply built over the top of what was already there, the previous city being abandoned at the beginning of the 5th century. I wonder what will be built on top of us?

We then headed through a non-descript door next to the London Wall car park to visit the fort remains that are kept under ‘lock and key’ by the museum. Here’s a model of what this site – the West Gate of the Roman fort – would have looked like in its ‘hey-day’.

Mike explained that this gate was probably more administrative than military. Gates around the wall – Bishopsgate, Cripplegate, Aldgate to name a few – aside from being defensive usually served as revenue-raisers, collecting taxes from those passing through. That this gate was un-named suggests it was less likely to support such functions.

Here are a couple of photos of the site discovered by William Grimes in 1956.

The area we visited covered only the left-hand section of model I showed previously – the guardroom and north turret, and the north gate – from the 14th century. Mike spent about 15 minutes helping us visualise the way the site would have looked, pointing out various details which archaeologists have used as the basis of their assumptions about life at the fort hundreds of years ago.

The official tour drew to a close after about 40 minutes but there was more to come. Mike mentioned that there was a piece of 4th century wall in the public car park next door that we could take a look at. I envisaged something quite small but after a brisk 10 minute walk, I was absolutely astonished to see this. 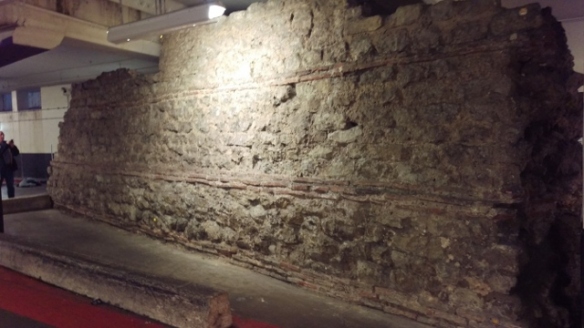 The detail was extraordinary. You can see in the photo how the wall has been constructed for strength, stepping inwards with each row of levelling tiles (these tiles are the red lines you can see). You can also see the difference between the dressed stone on the outside and the rougher packed stone behind it. 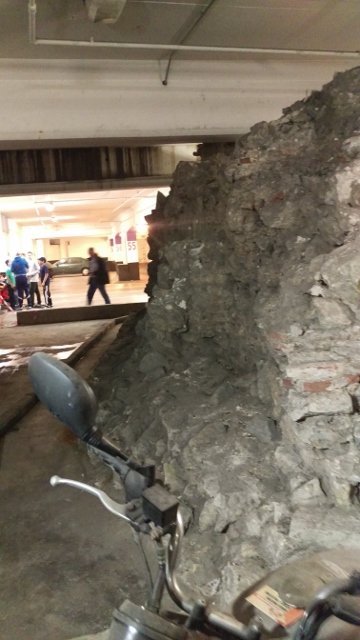 In London, archaeological sites are the responsibility of the land owner. Rather than being owned (and looked after) by the Museum of London, the car park is owned by the Corporation of London. It is a public space and so this historic site is at the mercy of exhaust fumes, human hands and unsympathetic modern additions.

I was really delighted to be able to see such an amazing piece of history up close (although at Mike’s request, we did not touch it – after all it is 1600 years old). But I felt irritated by its casual treatment.

A group of young skateboarders were gathered right next to it and several times I saw them lean on the wall, with some actually running into the wall itself. Granted they probably don’t understand the historical importance of this pile of stones or even if they do, appreciate it. When I think about my fascination with history, I realise that I’ve become more awestruck and humbled by it – in equal meaures – over the years. This is probably a result of my own ‘maturing’ in combination with moving to London from Australia (with its relatively shallow roots in European history) over a decade ago.

However, there was no excuse for the rubbish strewn around it by car park users and seeing the steel girder that had been inserted left me both sad and horrified.

To this end, I posted…okay, had a little rant on Instagram as I was reflecting over a post-tour coffee back at the museum. Paying for the tour itself (£5 is pretty amazing value given the expertise people like Mike provide), buying a book at the museum shop afterwards and even my new Friend membership feels like a tiny drop in an enormous ocean. Hopefully as I continue to explore what the museum offers, I will find more ways to support their work.

In the meantime, all I can think to do is to encourage you to visit these extraordinary sites – if not in London then wherever you are – to reflect on the history of humanity, how our society has evolved and perhaps consider how the story of our time might appear to the future generations.

4 thoughts on “The wall”