On my last visit Down Under,  Dad & B introduced Lil Chicky and I to Geocaching. It’s a bit like orienteering which I used to participate in pretty begrudgingly on school camps and throughout my Brownie years. You use a GPS-enabled smartphone instead of a compass and a physical map (you know, of the paper variety) to find something i.e. a cache. It’s like a technological treasure hunt.

It’s quite enjoyable and great for getting you active and out in the fresh air. And it’s hugely addictive: The urge to be the first in your group to find ‘it’ means that as you get closer, the casual chatting dwindles and scanning every square centimeter of your environment in the hopes of cracking the clue takes precedence. Some caches are extremely well-camouflaged and it can take a combination of an eagle eye and a willingness to get your hands dirty and rummage around in the undergrowth to uncover one.

As with any addiction, there’s always ‘just one more’. Borne on by the thrill of finding the next one, it’s really easy to end up wandering much further afield than you intended. In continuing the family geocaching legacy back in London, after an afternoon spent geocaching around Dollis Park, we had a sweaty 40 minute trot back to the flat in time for Lil Chicky’s airport pickup – we made it with about ten minutes to spare. 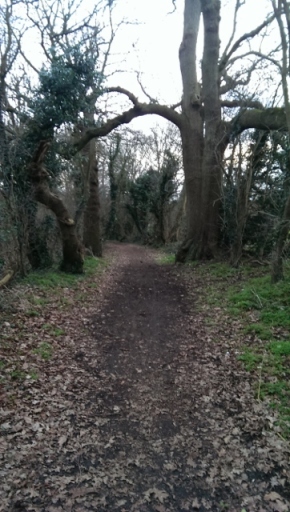 Geocaching along here needs a lot of foraging in the undergrowth

Searching for a cache beneath the Dollis Park Viaduct

On a different afternoon, after a lengthy search Lil Chicky and I finally found the much-sought-after cache in a North London park…by torchlight (another of the smartphone’s many advantages). I would just like to pause here and point out that it was January in London and the sun disappears early and fast at that time of year. It also meant we found ourselves locked in said park. The good news is that after a helpful tip from a couple of passers-by, we did manage to squeeze out around one of the more loosely-chained gates and caught the bus home…because we’d walked so much further than we’d planned.

I can only imagine that Pokemon Go is a bit like this…magnified. For those who don’t know, people use their smartphones to track virtual quarry – Pokemon – located at poke stops (which can be pretty much anywhere). Since its launch on iOS this week, the news has been full of the mayhem created by hundreds converging on particular poke stops to capture rare and valuable Pokemon species. (Check out this footage from The Telegraph in Washington, USA).

You may well laugh – I did – but it appears that we are a society of hunters and collectors, always searching for something and once acquired, moving quickly on to the next thing.

This is not new: Our most popular and enduring narratives are all based on the search for something, be they myths, legends, fairy tales or real-life chronicles. History and philosophy are full of stories about the quest for territory, for power, for peace, for love, for truth – and the satisfaction of acquiring ‘it’ in the end.

So the whole Pokemon Go thing has me wondering, in a chicken-and-egg kind of way, is humankind hard-wired for dissatisfaction or is it an innate competitiveness that drives us to search for more?  Which comes first? And is survival of the fittest – fittest being defined as those who best master the tenets deemed most valuable at any given period in time – a result of nature or nurture?

What do you think?

Will we ever have enough or will we always be caught up in the search for something more?

5 thoughts on “But wait, there’s more”