The battle is really hotting up over here.  Never mind all of that Saturday night twaddle about whether XFactor or Strictly Come Dancing got the highest ratings – although by my calculation there must be a lot of empty restaurants and Saturday night ‘venues’ around in these weeks leading up to Christmas.

No the REAL battle is over a couple of thick, brownish-black gloopy substances, Vegemite and Marmite. 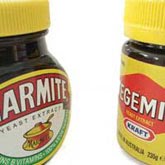 If you click here, you can read more on the latest tactics in this age-old war between the colonials and the Empire but in short, Marmite now has a store in Regent Street, London – only a pop-up one mind suggesting that this is not a long term Marmite strategy – to proclaim the brand’s…um…coolness.
Would be un-Australian of me to suggest that this in fact pointed not to coolness but to an inferiority complex?  I mean we don’t need to resort to this in Australia for one of our ‘own’ – every self-respecting Aussie knows the words to ‘Happy Little Vegemites’ (indoctrinated during hours of childhood telly – click here to see it for yourself) and there is nothing more comforting and nostalgic for us Down Under than hot buttered toast with Vegemite (partic. when the toast is based on the fluffy, nutritionally-bereft bread we loved as kids – when did Granary overtake this in our psyche I wonder?).

I suspect that Vegemite has had a reasonable showing in British supermarkets (and probably more so in the Greater London ones) because about 400,000 Aussies set up camp here and wanted some home comforts…and were prepared to be impolite enough (we call this being direct) to ask why it wasn’t stocked anywhere.  And supermarkets, being what they are and hating to miss a money-making opportunity, put the smallest, most cost-ineffective jars on their shelves.  And we then proceeded to indoctrinate partners, wives, husbands, children and anyone who sat at our breakfast table to the Antipodean delights of Vegemite on toast as the ULTIMATE morning-after-the-night-before cure.  So we all went to the supermarket or the Australia Shop or harangued fellow travellers coming from our great brown land to get us some more so that we could put ‘a rose in every cheek’ possible.

I rest my case.