In case you missed it, today is the Chinese New Year and we are now embarking on the Year of the Rooster. 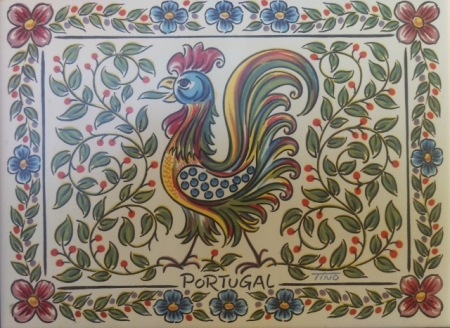 I bought this hand-painted tile in Portugal in 2002

According to the December issue of Director magazine (which I was flicking through yesterday), Roosters are uncomplicated and straightforward. The website travelchinaguide.com also claims that Roosters are “almost the epitome of fidelity and punctuality. For ancestors who had no alarm clocks, the crowing was significant, as it could awaken people to get up and start to work”.

I am an absolute stickler for time-keeping, loyalty and keeping my word (and expecting you to keep yours too!) so it is probably no surprise to you when I say that I am a Rooster.

Anyway, in conducting a bit of research for this post, I learnt that the Chinese Zodiac also assigns one of five elements – fire, earth, water, gold and wood – to each lunar year and that 2017 is a Fire Rooster year.

However being born in 1969 makes me an Earth Rooster. END_OF_DOCUMENT_TOKEN_TO_BE_REPLACED

June brings us up to the half way point of the year so it’s time for the interval, the intermission, the half-time break. So what’s been going on in the closing stages of the first half? Plenty as it turns out.

The headlines have been all about the referendum – the lead up and the fall-out – and we are still waiting to see who will step up to the mark and lead Britain into this next stage of our history. Attending a panel discussion hosted by The Guardian entitled ‘What will the world look like in 2025’ yielded little in the way of answers other than in this world where nothing seems to last, getting skilled in the art of managing uncertainty is a smart thing to do. And while all of this was going on, a new stage closer to home came to pass with a change of ownership at work and new management marking the occasion with a rather delicious cake to welcome us to the fold. I like them already.

This month I also started volunteering again and spent a morning at one of the local secondary schools…with more than 200 fourteen year old girls taking to the stage. This definitely took me out of my comfort zone and at the same time, left me feeling really inspired. More on this in a later post.

I was also delighted with another discovery of the stage variety this month: The Invisible Hand, a play running at the Tricycle Theatre in Kilburn. I even managed to get a little education on high finance as I watched high-flying banker Nick Bright, kidnapped by Pakistani militants, use his knowledge of how money works to stay alive. The cast of four were outstanding and combined with the compelling plot, I found the whole production both gripping and thought-provoking. However it finished at the Tricycle – itself a great find – on July 2nd, otherwise I’d encourage you to book your ticket but you should definitely keep an eye out for another run of this.

Staying with theatre exploits, I enjoyed a couple of previously live-screened plays in the comfort of my local cinema this month. The dark and broody staging of the RSC’s latest production of Hamlet was as one would expect but was also elevated by its militant Africa backdrop as well as by an extraordinary performance from 25-year-old Paapa Essiedu in the lead role.

At the other end of the spectrum, I spent a light-hearted evening with Oscar Wilde’s cast of pretentious yet lovable characters in The Importance of Being Earnest. David Suchet – you may know him as the eccentric Belgian detective Hercule Poirot in many an Agatha Christie whodunnit – sashayed around the stage as the inimitable Lady Bracknell and with witty repartee and oodles of innuendo, it was a very entertaining couple of hours indeed.

I also spent a hour or so wandering in between various stages of Undressed. No not me personally. It’s an exhibition on the history of underwear at the V&A running until March next year. Seeing some of those teeny tiny corsets up there on their podiums made me feel quite Amazonian in stature and also rather glad that I live in an age where I can dress in relative comfort and not have to worship at the altar of society’s [size 6] ideal. The blokes are not exempt from a little vanity either – there were quite a few examples of ahem, shapewear (not to mention that my ‘mens enhancing underwear uk’ google search yielded more than 76,000 results).

But without a doubt, this month’s highlight was The Battle of the Big Bands at Cadogan Hall. The Jazz Repertory Company recreated the famous 1938 battle on the stage at Carnegie Hall, a musical masterclass between the established Benny Goodman and the up-and-coming Glenn Miller. Compere cum clarinet maestro Pete Long (he was absolutely awesome and fairly made that clarinet talk) brought this great rivalry and the eventual changing of the guard to life with his savvy storytelling. With all of my favourites on offer – Sing Sing Sing, Little Brown Jug and In The Mood – the whole night was just brilliant, foot-tapping fun and In The Mood was definitely how I felt going home on the tube.

That, my dear Gidday-ers, was June and as the curtain falls and June takes its bow – having been fun and full of plenty – I’m already off treading the boards into July…

What’s that? An encore you say? Well okay – here are a couple of my commuting gems from Victoria Embankment, the site of many of the Thames’ old landing stages…

Have yourselves a fabulous July peeps.