A quick recap – I went to Seattle to visit my friend, we decided to nip up to Victoria (the one in Canada) on the clipper and spent our first afternoon wandering around Butchart Gardens and eating ice-cream. We then returned to our hotel for a little rest and reconnoitre while contemplating this view… 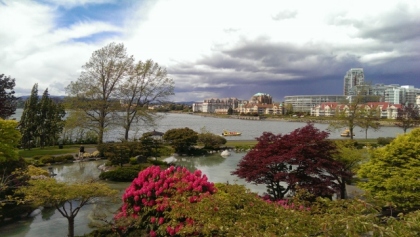 We had a great dinner that evening at 10 Acres Bistro, a local bar and bistro where the menu is based on what’s available from the farm, the 10 acres of the name, on the Saanich Peninsula. The portions were huge and delicious and it was just as well we had a 20 minute stagger back to the hotel to help digest it all.

But this was just the beginning.

The morning dawned, cool and blue-skied and it was time to tackle our second culinary milestone: breakfast at Blue Fox Cafe.

This had consistent rave reviews wherever we looked and we were not disappointed – it was fresh and scrumptious both in the decor and the dishes. We made our way through a couple of enormous plates (almost), picked at the fattest slab of French toast we’d ever seen (smothered with gorgeous local maple syrup of course) and chatted with a local couple at the next table who had been coming to the Blue Fox for years. (We found ourselves at the effect of many conversations with locals that started with ‘oh I just love your accent’ over the two days.)

This was by far the best meal of the trip (the others were fabulous so this is high praise indeed) and I would absolutely recommend you getting yourself there – apparently it’s crazy busy on the weekend but at 10.30-ish on a Wednesday morning, we only had a ten minute wait.

Absolutely stuffed, we headed back towards the harbour, stopping along the way to a) buy a loaf of the honey, apple and raisin bread to take home (it came with my omelette and we both fell in love with it – disappointingly we were informed that it was only made on Friday’s…sob!) and b) check out some of the local beauty services on offer. 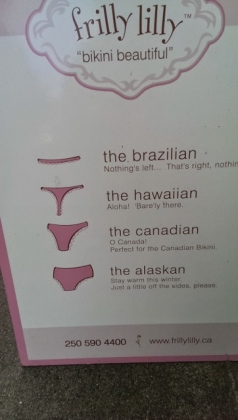 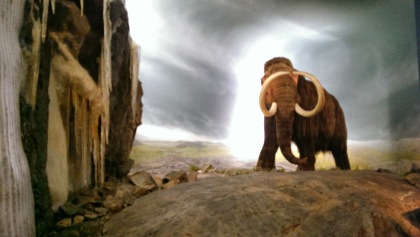 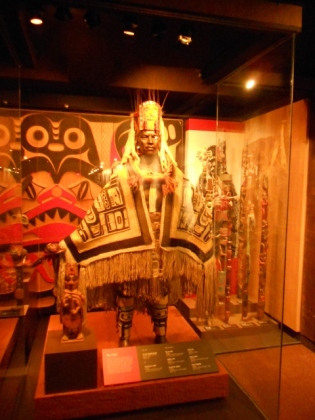 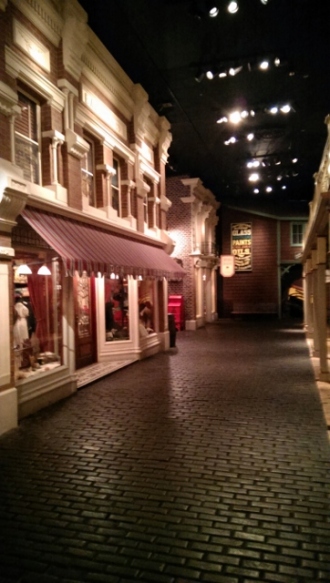 To coin a local turn of phrase, this was awesome. The exhibits were really interactive and atmospheric and it seemed that around every corner there was a new way to immerse ourselves/learn something. Since our return, a lot of people I’ve spoken to have a) admitted that they did not visit it and b) recommended the Legislature Building tour but we were both so thrilled with our visit that I haven’t yet felt that we should have spent either less time there or spent it somewhere else.

Next it was time for some general wandering to admire the sights.

The Empress overlooking the harbour. The most famous hotel in Victoria and advertised purveyor of excellent afternoon teas. We did not stop as we had other foodie pursuits in our sights. 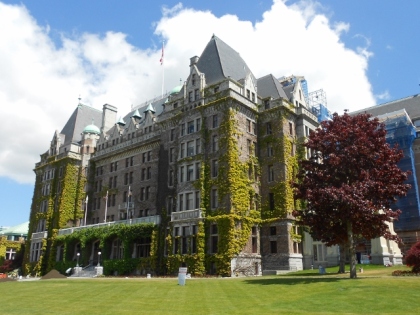 There was traditional architecture galore along the harbourside walk to our hotel – this guest house was my favourite.

Along the waterfront stands a statue of Captain James Cook – yes the same one that foundered on Endeavour Reef off the NE coast of Australia in 1770. Clearly not put off, Cook continued his explorations and in 1778, was looking for the entry to the North West Passage when he stumbled across Victoria Harbour. (This guy really got around.) It took another 65 years for the Hudson’s Bay Company to build their fort on this site in 1843.

This mini Empire State Building also stands on the waterfront but atop the Tourism Bureau…for the life of me I cannot remember its significance but the photo does confirm that we were blessed with gorgeously sunny almost-t-shirt weather.

We also indulged in a spot of shopping and added shoes, little dude apparel and for Seattle-A, a selection from local chocolatier of note, Rogers.

With the afternoon advancing, it was time to tackle foodie milestone number three, a spot of fish and chips at Red Fish Blue Fish (a spot of Dr Seuss always adds a little something to a day). At 3pm, the wait was about 25 minutes so Seattle-A held the line…

…while yours truly snagged a couple of seats with a view.

Needless to say we made short work of things – falling-apart fish, lightly battered pickles (a Pacific North West specialty), crunchy golden chips – and washed it all down with a craft brewed ginger ale from Sparkmouth.

So with our last supper under our belts, it was time to loosen things a notch, collect our bags from the hotel and head to the clipper terminal for the trip back to Seattle.

We had such a great time together, enjoying both the discovery of somewhere new and blazing a culinary trail together and in pulling together these two trip posts, I was reminded – somewhat appropriately – of this quote from Seuss’ One Fish Two Fish Red Fish Blue Fish which seemed to sum up our northern adventure…

And that, my friends, was that!

Things to do/restaurant sections were great reference points for us. That it all links through to Tripadvisor also means that you can see what people really thought and it was the Tripadvisor rating that drove us to choose the Royal BC Museum over everything else.