In perusing my weekend-ly dose of Saturday Times this morning, I read that Deborah Meaden – yes the multi-millionaire businesswoman on Dragon’s Den – was a gifted pianist as a child who, upon winning a prestigious music scholarship, decided she wouldn’t do it because ‘all eyes were upon me and it became someone else’s thing.’

She doesn’t say anyone pushed her but does cite her ‘refusal to obey orders’ in the preamble to this tale. I suspect no-one ordered her to ‘do’ anything but rather felt that they were merely encouraging what she loved to do anyway and wanted her to fulfil her promise. But now her passion and talent had an expectant audience and it had stopped being hers.

And in her anecdote of childhood wilfulness, I recognised myself and a lifetime of rebellions and I won’ts flashed before my eyes. If you are regular Gidday from the UK reader, you can probably figure out some of these for yourself, my sudden move to the UK being among the most notable.

But there are many – giving up clarinet as a teenager after 9 years of playing, an all-or-nothing approach to my tertiary choice, a double degree that no-one had heard of (no-one did 2 degrees at the same time then) at an institute of technology, rather than a university. Not playing the corporate ‘open all hours’ game to get ahead, climbing the ladder at a rapid rate anyhow by producing results no-one thought I could. Refusing to fill my life with the work or ambition that ‘society’ suggested I should in the absence of children. And even now walking away – sometimes mentally as well as physically – from the people and the things that don’t work for me.

It took me a long time to reach this point – where my life is mine and mine alone – and to stop feeling battered by the best-intended expectations and good opinions of others. For while my rebellion may have seemed intransient on the surface, it was so often underpinned by guilt and inquisition. Was I cutting off my nose to spite my face? What sort of a person did this make me, this proud and jealously possessive soul?  Selfish, impatient, ungenerous, obstinate and righteous?

These were not ‘nice’ things to know about myself.

I look back over almost 9 years in London and I am proud of what I’ve learned from all the challenges I’ve faced here and how my expat experiences have given a different cast to the way I shape my life. That’s not to say that all of those years leading up to January 2004 didn’t teach me a thing or two. Things like resilience, resourcefulness and learning to ask for help (although the last could always use a little more practice than I give it).
Somewhere along the way I learned to believe that saying no was valid, that disagreement was OK. That the love and the listening of close family and true friends really was unconditional, whether they actually liked what I was doing or not. That they just wanted happiness and success for me even though the direction I chose did not appear to be the obvious path to them.

Many years ago, I committed to living a life of complete generosity and inspiration. Little did I realise that the biggest bridge to cross was to be those things for myself first before others.

And in this, I finally learned that all of the ‘theys’ (and that includes all of the ‘yous’ who might be reading this now) don’t have to like my life.

And that is when I found happiness. 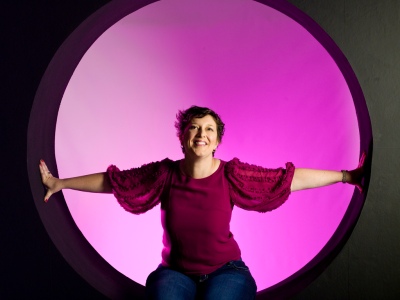