This week I attended a evening of talks at China Exchange, a charity based in London’s Chinatown whose mission it is to create ways of exploring Chinese culture and China’s influence on the world. I fell across them late last year in attending a provocative discussion between Sir David Tang and Mr & Mrs Smith CEO James Lohan and have been keen to attend something else ever since.

This one-night-only event featured five speakers who had eight minutes each on their allotted subject followed by questions from the audience. They covered a range of topics from Chinese medicine (and what is it really?), Hinkley Point C and the role of Chinese investment, feminism in China and the opportunity that Chinese tourists represent for the British economy.

I know very little about China and Chinese culture. During an emerging market project about 18 months ago, I was surprised by the level of Chinese investment in large infrastructure projects in Africa and I’ve only had limited exposure to ‘Chinese’ medicine. Needless to say I found it an educational and thought-provoking evening.

But the eight minutes that really left me thinking were delivered by Dr Victor Fan, a Senior Lecturer at King’s College. His topic was ‘white washing’ in the entertainment industry i.e. non-Asian people playing Asian roles. It was every bit as interesting as the others but it was when he spoke about his experience of getting a visa to live and work in Quebec, Canada – one that specified that he would speak French and adopt local practices – that something struck a chord.

END_OF_DOCUMENT_TOKEN_TO_BE_REPLACED

I love discovering London’s hidden stories and last Saturday I joined Blue Badge Guide Paula Cooze to discover to the story of Spitalfields.

It’s not the first time I’ve ‘toured’ with Paula, having started my fan-dom in September 2013 in the shoes of Matthew Shardlake followed by an architectural wander around the City four months later and then an amble around the Globe mid 2014.

So you can see that it’s been some time since a missive from Paula has found its way into my inbox and it was perfectly timed as Spitalfields is an area I brushed past earlier in the year and I have been itching to do ‘more’.

Wave after wave of immigration has shaped this gritty pocket of London and what was once slum housing and dangerous streets, has become regarded as one London’s places to be. In fact the gentrification of Spitalfields is fostering considerable debate and even protest, the most recent being the attack on the Cereal Killer Cafe at the top end of Brick Lane in September.

It’s a part of London bursting with expression, riven with side streets and alleyways and clothed in a patchwork of colour and smell. I was so excited that, in babbling on about it to friends after I’d booked my place, I actually inspired a couple of them to come along.

Spitalfields was named for the priory of St Mary Spittel, founded in 1197 in a field right next to the site of the current market. The area lay just outside the walls of the City of London and attracted many merchants and craftsman who were not part of the restrictive City Guilds operating inside the walls.

The multicultural history of Spitalfields is steeped in the ‘rag trade‘ and a fitting place to start our trip down memory lane was with a visit to Petticoat Lane. This street – now called Middlesex Street – was home to many Spanish immigrants in the early 17th century and although the famous market was only formalised in the 1930s, it has always been the place to come for cheap, second-hand clothing. 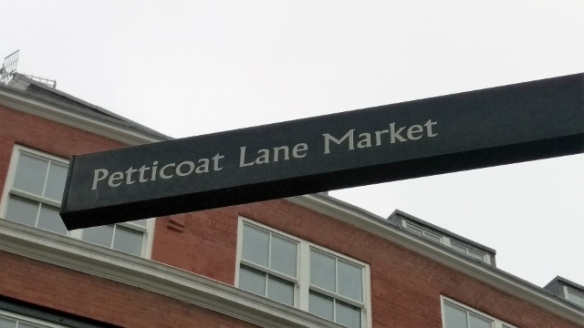 The Huguenot silk weavers arrived in the late 1600’s to capitalise on the area’s burgeoning reputation as a garment district and were followed in the early 1800’s by the Jews fleeing the pogroms in Russia. Both fled persecution with little but their trade and so their sewing machines were a life-line, the only way for them to earn a living and survive each day in this then slum-ridden part of London. 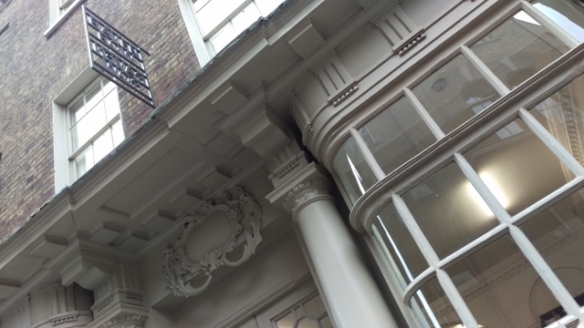 This beautifully preserved silk weaver’s shop and residence in Raven Row is now an art gallery so you can take a wander through to see how the more affluent lived in the past and how the locals are expressing themselves today. 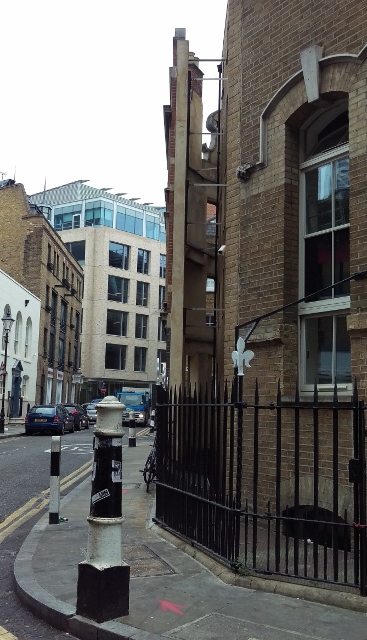 When we turned around from the silk weaver’s windows, Paula pointed out this controversial facade running along the back of Lilian Knowles House.

We headed down Artillery Row – the name a nod to King Henry VIII’s gifting of the area to the military during his reign in the 16th century – turned left into Crispin Street and passed alongside the Providence Row Night Refuge (now called Lilian Knowles House). It was here that Paula added yet another immigrant community to her story – the Irish, arriving in the mid 1700’s with their dreams of escaping the potato famine in Ireland to build a brand new life in America. The majority could not afford the dream and so stopped where the money ran out – in London.

We walked around past the ‘new’ frontage of Spitalfields market, stopping to admire number 40 Brushfield Street. Verde & Company Ltd is a tribute to both the slow food movement and the history of the area – Paula mentioned that author Jeanette Winterson is one of the owners…and that a hot chocolate will set you back about £5. (Just as well the more affordable – not by much – Patisserie Valerie is across the road.) 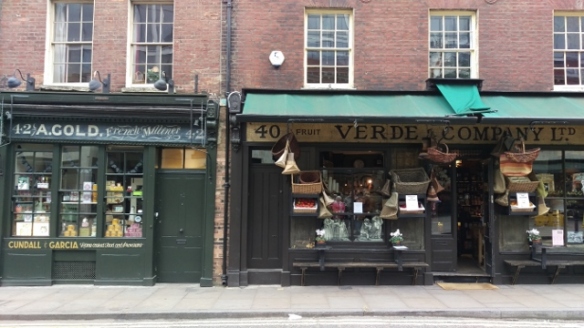 We then turned right to head north(ish) though Bishops Square, pausing at the old Huguenot silk weaver’s residence at 18 Folgate Street (which has been painstakingly restored by Dennis Severs – pundits really rate the multi-sensory tour)… 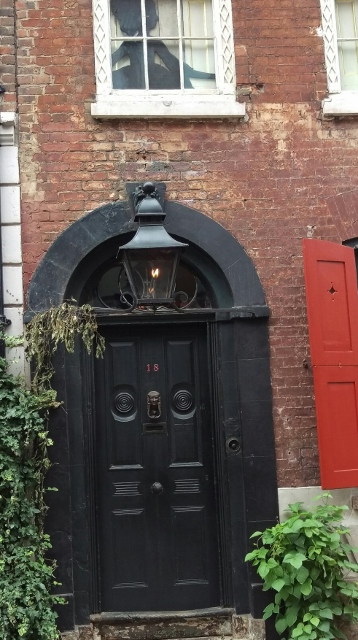 …and with a quick left down the alley at the end of Blossom Street (the most inappropriate name for a street ever), we emerged at the bottom end of Shoreditch High Street. Ambling along Bethnal Green Road and back down to Brick Lane Paula explained to us a little about the street art scene.

This commissioned street art adorns a local locksmith on Bethnal Green Road. That’s the entrance on the right painted as the opening of a vault. 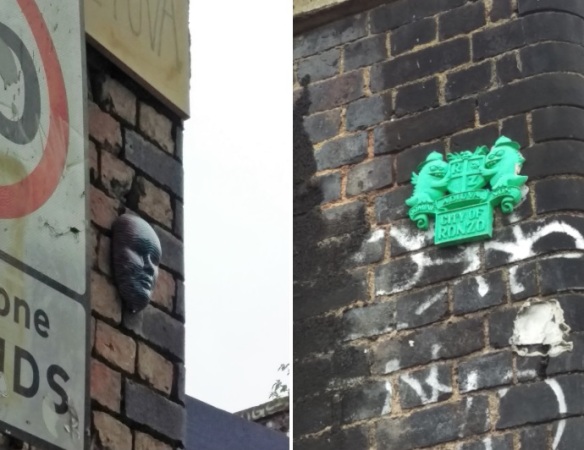 Nice to see two of my favourites from my walking tour through Shoreditch in June – Gregos on the left and Ronzo on the right. 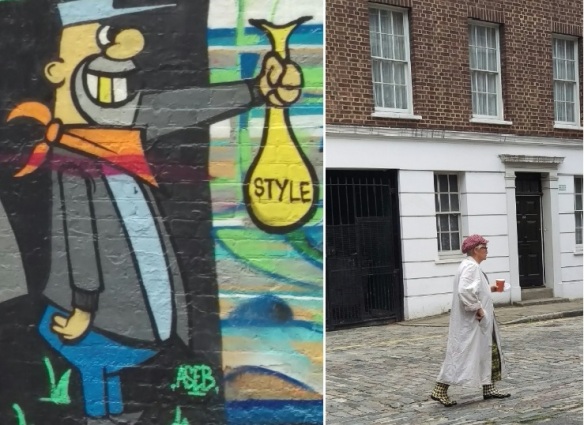 Life imitating art? Or is it the other way around…. 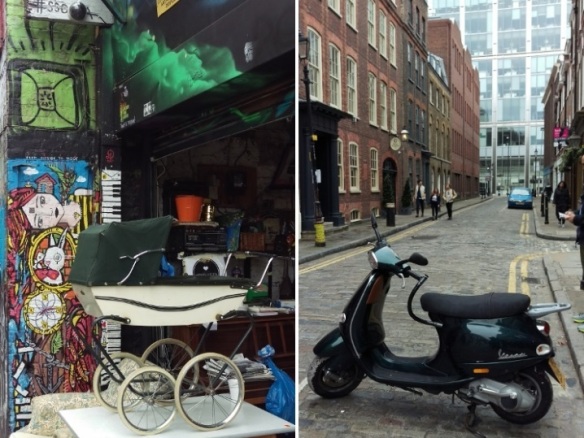 Street art frames transportation for the young…while this Vespa was one of many I saw, perhaps appealing to the young at heart?

After cutting through the Old Truman Brewery complex and along Commercial Road (this is the side of Spitalfields Market that has had its original facia preserved), we made our way down Wilkes Street – where Keira Knightley‘s pad is up for sale – and into Fournier Street. 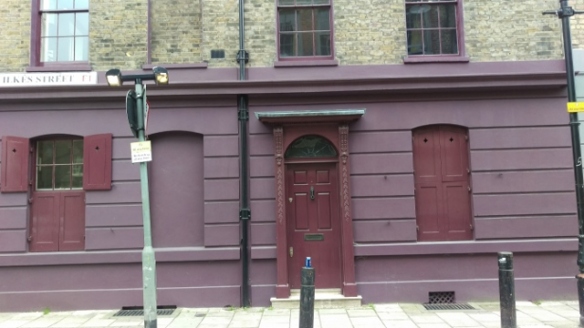 Keira’s townhouse has been up for sale for a while – I’m not sure whether it’s the price (the guide price on rightmove.com is a paltry £3 million) or the purple that’s deterring prospective buyers… 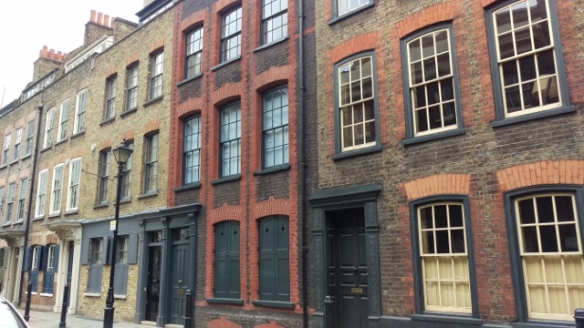 And it’s here that Paula told the last of her stories and bade us all farewell. Another great tour from Paula – done. 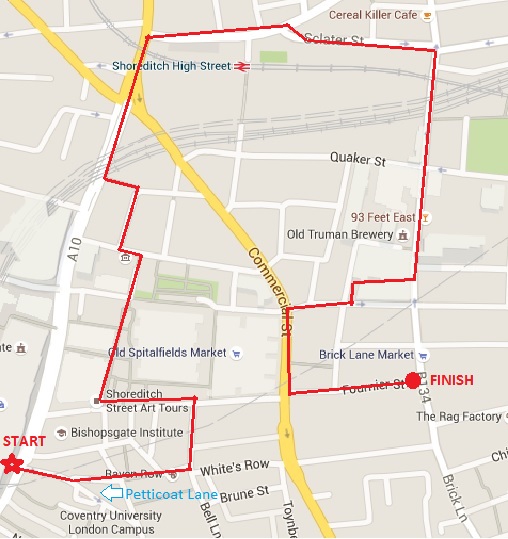 So I’d really encourage you to have a look around the area for yourself – I’ll be checking out a visit to Dennis Severs’ house to really immerse myself in history.

But really, to get the full story, you’ll have to wait – perhaps patiently – for the next time Paula crosses the city.