London has a lot of museums and galleries and many are free but sometimes it pays to spend time getting to know a particular museum well.

One of my favourite museums in London is the V&A. It bills itself as the world’s leading museum of art and design but what I love is the way that the V&A uses these themes to bring stories to life. Exploring the diverse history of different parts of the world or dissecting the nature of our society and the environment we live in through the lens of human creativity and expression is a wonderful way to spend a few hours.

I’m at the museum every couple of months for the V&A book group and always go early, thinking I’ll pop into an exhibition, explore a specific gallery or take one of the free guided tours to make an afternoon of it. And in ambling around, I’m usually delighted by something unexpected: the view from the top of a newly-discovered staircase or a fascinating item tucked away in an unbidden nook or cranny.

In a place where there’s so much to see, I’ve come to realise that it pays to wander with only the semblance of a plan, to linger and read about the things that simply take your fancy. It also pays to look around – that’s up, sideways, around corners and behind you.

If you look up as you enter through the main museum entrance from Cromwell Road, it’s hard to miss Dale Chihuly‘s spectacular 27ft (8.2m) sculptured-glass chandelier suspended airily above the information desk.

The Rotunda Chandelier in the museum’s main reception, viewed from an upper gallery at the top of a staircase I’d never climbed before.

The view looking up from the information desk on the ground floor. I’m feeling very grateful for the excellent zoom on my camera phone – look at all of that exquisite detail and the individuality of the glass elements.

The chandelier comprises 1,300 blue and green hand-blown and mould-blown pieces – these were made in Chihuly’s Seattle studio and then took five days to assemble – in situ – over the chandelier’s steel frame.

Every time I visit and look up at it, I want to take another photo. It’s definitely one worth lingering over.

Last December I planned for my visit to include a wander around the Opera: Passion, Politics and Power exhibition near the new Blavatnik entrance on Exhibition Road. However, the tunnel entrance from nearby South Kensington tube station had been closed so I’d been forced to make the 10-minute walk to the museum above ground.

Glad to escape the damp grey day outside, I breathed a sigh of relief as I dashed through the Cromwell Road entrance and tore off my woolly scarf and hat…only to be pulled up short by an hypnotic display of sound and light.

As part of the V&A’s annual Christmas programme, set designer Es Devlin combined modern innovations like crowd-sourcing and machine-learning to conceive this Singing Tree. Installed inside the Grand Entrance between 27th November 2017 and 6th January 2018, museum visitors were invited to contribute a festive word or two that became part of this mesmerising audio-visual carol.

The video doesn’t reproduce the carolling voices very well but believe me, being greeted by this after braving a cold and blustery December day was a complete joy.

I had arrived a little early for one of the free gallery tours that leave from beneath the Rotunda and rather than stand around waiting (remember peeps, I will never be British enough to wait when I don’t have to), I decided to amuse myself by meandering around the neighbouring gallery.

399 Days is a five metre tall column of writhing porcelain figures and it looks pretty interesting from a distance. However it was in getting up close that it became fascinating and I lost the entirety of my 15-minute early-ness poring over the intricacies of this extraordinary piece.

This surprising gem hangs above the members’ cloakroom desk (which is up the staircase behind you as you come in from the museum’s tunnel entrance). It’s a pretty enough piece but it wasn’t until I read the wall plaque that I really got excited about this one. Peeps, this is a breathing chandelier. 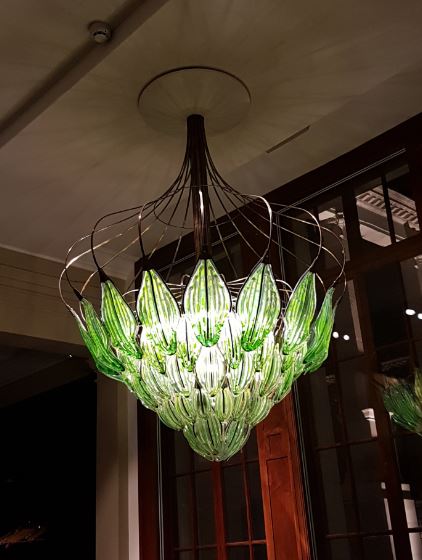 Designer and V&A Engineer-in-Residence Julian Melchiorri combined advances in biotechnology, engineering and architecture to come up with this life-affirming bionic chandelier. The ‘leaves’ of the chandelier contain microalgae: when they are fed with water they remove carbon dioxide from and release oxygen into the surroundings.

(Remember learning about photosynthesis in those high school biology lessons? This is pretty much it peeps.)

Its location is a bit tucked away but don’t be put off. It’s easy to get close to and you’ll be able to spot it as you come up the aforementioned stairs or down the staircase from the upper floor of the European Galleries.

Even as I sit here typing this, I still feel absolutely thrilled by how clever this is – it also makes me wonder how it could be applied more widely in our increasingly polluted world.

In 2014, the Tower of London marked 100 years since Britain entered WWI with a temporary installation – called Blood Swept Lands and Seas of Red – where 888, 246 of Cummins’ hand-made ceramic poppies were planted in the tower moat to represent each of the British military lives lost. Five million people visited the installation between July and November 2014 after which the poppies were sold and the proceeds donated to six service charities.

The sixteen poppies on display just opposite the Members’ Cloakroom were purchased by the V&A as a tribute to the sixteen members of its staff who died in the War – their names are also inscribed on a memorial tablet at the Main Entrance on Cromwell Road.

And finally, when all is said and done, there’s nothing better than having coffee and cake in the glorious historic rooms of the museum’s main cafe.

The museum’s founding Director, Henry Cole had learnt a thing or two about public refreshment while running the Great Exhibition in 1851 and believed that a museum restaurant would be a way to encourage people to enjoy culture. Well ahead of other museums (that did not invest in catering until the 20th century), Cole invested in the world’s first museum restaurant at the V&A, opening the Gamble Room in 1868 followed by the opening of the Poynter and Morris rooms on either side.

These three rooms form the hub of the V&A’s main cafe and any of them are an especially pleasant place to rest your weary legs after wandering around the galleries. If you are lucky, someone might be playing the piano in the Gamble Room. In any case, I’m  a big fan of the restorative benefits provided by their Black Velvet cake…

Oh yes, that’s definitely something I fancy and it’s not for sharing!

In the meantime, if you fancy a cultural boost to your creative spirit, I’s recommend a visit to the V&A. And if you are a fan already, please leave a comment and let me know what little bits of the V&A you fancy…and where I can find them!

Today Mum's website for "Children of Change: A Memoir" went live. Check out the photos, book synopsis and my biography and stay tuned for more additions at carolekellyauthor.com #childrenofchange #memoir #mountmorgan #carolekelly #carolehumphreys #chloe #author #prouddaughter
THE GOLDEN GIRL Today is my birthday. It's a big one. Yep. 50. So I've decided to celebrate my 50 golden years by sharing 50 golden nuggets. With you. They'll be 50 things that have inspired me, challenged me, pushed me, taught me. Mantras, soundbytes, quotes, lessons. One each day. For the next 50 days. Let me know which ones strike gold for you... Kym Hamer Golden Girl #kymhamer #50GoldenNuggets #businesscoach #entrepreneur #speaker #goldengirl #inspiration #sophialoren
HOME AT LAST The cushions have been plumped, the final touches have been made and the welcome mat is out. www.artemisfutures.co.uk is now live! Here's where you can find out about: - how to accelerate results for you and your business - upcoming events to build your connections and capabilities - top tips on mastering uncertainty and navigating the future And right there on the home page, you can sign up to have the latest insights and workshop opportunities delivered straight to your inbox. So welcome to the future. I look forward to navigating it with you. Kym Hamer Founder, Artemis Futures Mastering Uncertainty | Accelerating Results #kymhamer #artemisfutures #navigatingthefuture #accelerateresults #masteruncertainty #businesscoaching #insights #success #successincubator #business #future #results #outcomes #skills #connections #capabilities #uncertainty #coachkym
Beethoven's Moonlight Sonata by Candlelight in the beautiful St-Martin-in-the-Fields in London's Trafalgar Square.