On Friday afternoon I was in Euston with a couple of hours to spare before meeting a friend for dinner near Kings Cross. Thinking that lingering in a cafe over a single coffee for so long might be pushing my luck, I hit on a fabulous idea – popping in to the British Museum.

I first visited the British Museum in 2000 and back then, barely covered the Egyptian Galleries. Since then, I have been to see specific events or temporary exhibitions but have never taken a look at the other permanent galleries. So brimming with inspiration and purpose, I trotted down Woburn Place, through the dappled shade of Russell Square and in twenty minutes, strode through the shaded museum entrance, dropped some coins in the donation box and collected a map.

With just over an hour to spare before I needed to leave, I decided to follow the ‘if-you-only-have-an-hour’ highlights route suggested on the map. I figured this would do two things.

The first was to get me in front of famous stuff I knew about – like the Rosetta Stone and the Parthenon Sculptures (I’d only known these as the Elgin Marbles before Friday’s visit) – and some famous stuff I didn’t know about. The second bonus was that it would take me through a range of different galleries so I could take a squiz and decide whether I was inspired enough to pay another, more focused visit.

I got around to just nine of the twelve objects on the map mainly because I kept stopping to look at other amazing things along the way. So the highlights trail* also did a third thing – it almost made me late! Here’s what happened.

As I’d entered from Montague Place, I was in position to tackle the trail backwards which meant making my way to the ground floor. My first stop was at the end of Room 24 to admire this awesome Easter Island statue, Hoa Hakananai’a* (below right). I then headed out into the Great Court and took a right turn into Room 4 for the Rosetta Stone* (below left) which proved quite difficult to a) get close to and b) take a decent photo of. Continuing on into Room 18, I found myself surrounded by the Parthenon Sculptures* (below middle) – it’s a huge room and this is definitely one worth coming back to with plenty of loitering time.

As I headed back out of the long, marble-lined gallery, I took another right turn to explore a whole load of these amazing carved Assyrian reliefs* in Room 10.

With four highlights done, I was feeling pretty pleased with what I’d seen so far.

Next I headed across the Great Court and through the shop at the museum’s main entrance from Great Russell Street. My next target was Room 2a, home to the Waddeson Bequest. This collection is comprised of 300 objects donated to the museum by Baron Ferdinand Rothschild in 1898. I was here to see the medieval Holy Thorn Reliquary* but this was where I started to go a little off-piste, distracted by other treasures like the Palmer Cup (below left) from 1200-1250 BC and a gilt brass hunting calendar from the 1600s (below right). Unfortunately neither photo does justice to the wonderful detail in these two pieces.

Finally I reached the cabinet holding the Reliquary and I realised why this piece was heralded as a highlight on the map. I gazed open-mouthed for several minutes, awestruck by the extravagant jewels and pearls lavished all over this small gold piece. 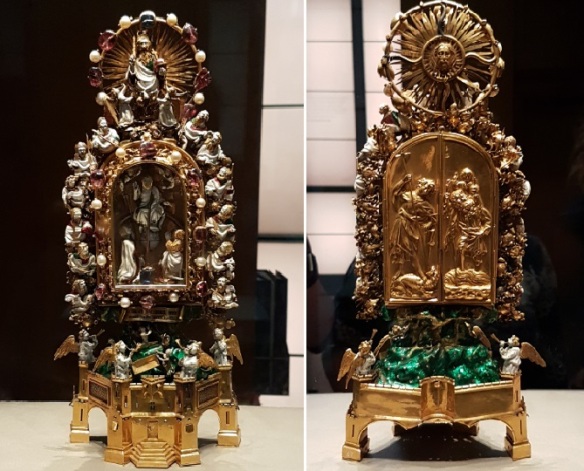 I trotted back out to the entrance vestibule and headed upstairs to Room 40. I’d never heard of the Lewis Chessmen*, despite them being billed as ‘the most famous chess set in the world’, and I have to say I was delighted to make their acquaintance upon my arrival.

I passed into the next room (41) en route to my next highlights stop only to find myself surrounded by all sorts of treasures from Sutton Hoo. I couldn’t resist lingering over the re-constructed drinking horn (below left) and the slightly Muppet-like figurehead from the prow of a Viking ship (below right).

I continued on, walking the length of the east wing and paused briefly at the end to admire some Iranian metalwork* before turning left to reach Room 56 and the very old Royal Game of Ur* (2600-2300 BC).

I was walking through the gallery on my way to the next highlight when I was struck by the Homer Simpson-esque countenance on this statue of King Idrimi of Alakah (1560-1500 BC). Then I drew closer to discover the intricate cuneiform etched all over it.

I found a lot to admire in this section of the museum and made a mental note to return for a more leisurely nose around. I definitely want to find out the stories that lie behind these glazed bricks from the Throne Room of the palace of Babylonian king Nebuchadnezzar II (605 – 562 BC), this tiny gold chariot (below right) and many of the other things I spied as I whizzed past.

Back on the highlights trail again, I headed around to Room 70 in the west wing to check out the Portland Vase* (below), the Roman inspiration for the iconic Wedgwood design.

After a short walk around the display cabinet, I about-faced and headed back towards the north stairs. I was intent on getting up to the Japanese Galleries to pick up the trail again but could not help but pause at the sight of the stairwell full of Roman mosaic floor tiles (below).

I headed up to the Mitsubishi Corporation Galleries on Level 5 to eyeball this Samurai armour* from medieval Japan (below right) but got waylaid – I know, again – by this strange-looking clock (below left). Seeing these two exhibits side-by-side in the montage below makes me think of Star Wars. 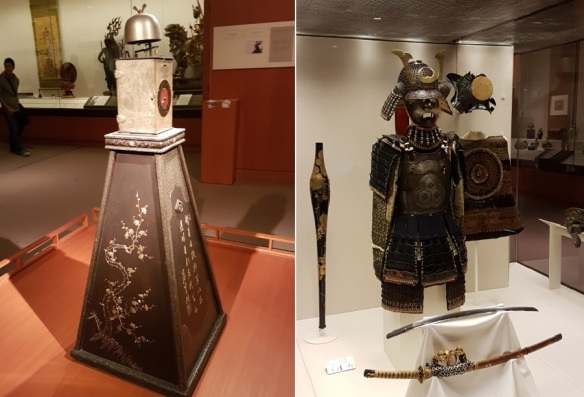 Glancing at my watch, I realised that I needed to get going to ensure that I didn’t leave my friend waiting. So I kept my head down and my eyes averted as I walked down the stairs again – but to no avail.

This is the Amitābha Buddha and she stands almost six metres tall in the lower portions of the north stairwell. She was spectacular. I had to stop.

And then I was coming down the final flight of stairs when my gaze fell upon these glorious glazed roof tiles which would have adorned the ridges of a temple complex in northern China during the Ming dynasty period (1400-1600).

And with that, I finally made it out the door and, with a bit of legging it, got back to Kings Cross just in time. Prosecco is a fine motivator indeed.

So that was my hour of highlights at the British Museum. It has definitely inspired me to return for a meander around Assyria, Mesopotamia, Japan and the Parthenon when next I have an hour to spare.

After all, I already have the map.