I went to see the West End version of Funny Girl last night.

For those of you who don’t know, it’s the semi-biographical rags to riches story of American actress and comedian, Fanny Brice. I’ve long been a fan of the movie starring the inimitable Barbra Streisand and ever since this latest run in London was announced, I have been keeping an eagle eye out for a deal.

So yesterday, I battled the Saturday evening throng to take my seat at the Savoy Theatre (itself a Gidday first). 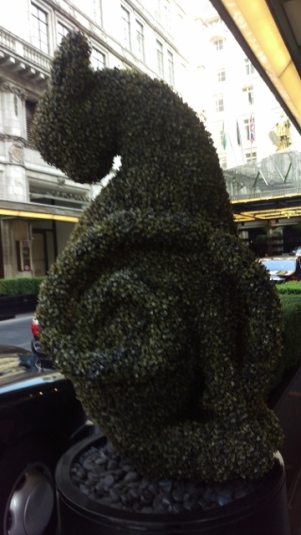 Savvy (or should that be Savoy) topiary on arrival.

I felt excited and wondered whether the show and its star, Sheridan Smith, would live up to the hype. And boy oh boy, it did!

Darius Campbell played the smooth yet hapless Nick Arnstein sympathetically – he filled the theatre with rich, sonorous tones like velvet. And the rest of the cast were brilliant but it was Sheridan Smith who stole the show.

I’d seen Smith previously in a couple of television dramas – The Accused: Stephen’s Story in 2012 and The 7.39 in 2014 – and had been seriously impressed by her acting chops but I had no idea just how far her talent stretched.

Smith filled the stage with her presence, flinging her tiny frame into the gauche mannerisms and Brooklyn twang of the unpolished Brice. Her timing was impeccable and, ably partnered by her cast mates, she gave us plenty of laugh out loud comedy moments. She played Brice as the pushy, domineering, larger-than-life character that I remember as being really irritating yet she gave Brice a heart-melting pathos in the second act as she faces the price of her success.

In addition, let me tell you tha this pint-sized lady has a serious set of pipes. Taking on songs made famous by Streisand – People, Don’t Rain on My Parade and I’m the Greatest Star – is no mean feat and Smith was absolutely magnificent in making them her own.

The show finished, the cast emerged for their bows and Smith, clearly emotional, got a standing ovation. It takes something quite special for me to leap to my feet at the end of a performance and I clapped and clapped and clapped until the stage finally emptied.

As we all flooded out onto the street, the signature tunes and Smith’s showstopping voice stayed with me with the defiant strains of Don’t Rain on My Parade playing over and over in my head all the way home.

Funny Girl is playing at the Savoy Theatre in London until 8th October so if you want to see this musical marvel for yourself, I’d advise you to get a wiggle on.