I am a curious person. I’ve mentioned it before, this tendency to lose myself in the pursuit of interesting things. It becomes a bit like the proverbial rabbit hole as I follow some convoluted thread through not only my regular ‘haunts’ but also to new and inspiring sources that I inevitably add to my ‘follow’ list.

This week’s haul has been particularly rich in the ‘how interesting’ department so here are a few of the titbits I loved the most.

The smell before the storm

I love that smell just before a storm hits. It’s a really clean, slightly metallic smell that heralds the impending downpour. Well according to my regular dose of Mental Floss, that smell is caused by electrical charges that break down atoms which then reform into nitric oxide. This reacts with other chemicals in the atmosphere to create ozone which causes the ‘chlorine’ odour.

However, I question the chlorine claim. After all, I swim a couple of times a week and believe me, that pool smells like chlorine. Maybe a lifetime of swimming has made me less sensitized to ozone’s more fragrant charms. Or perhaps there’s something familiar and comforting being triggered in my brain. In any case, it was one more conundrum solved and led me to ponder whether more storms would help to fix the hole in the ozone layer.

Flipboard is a great app that allows you to choose what types of articles you’d like to receive and I love dipping in and out during my commute. This week I found my way to a piece in Esquire that delved into the origins of alcohol consumption. It appears that this goes well beyond the human condition and was critical for our predecessors’ survival.

You see, while modern life finds us all looking for ways to reduce our caloric intake, our primate ancestors found feasting on over-ripe (and therefore fermenting) fruit an excellent way to get the energy needed to swing from tree to tree all day long. Add to that the need to survive by hunting and gathering enough to eat and you’ve got yourself the perfect excuse to booze all day, every day.

I wonder how much booze my fortnightly online grocery shopping would permit me. Not much I suspect.

The pyramid inside the mountain

Flipboard also led me to BBC Future piece on the ancient pyramid beneath a mountain – well, actually underneath a tiny hilltop church in Chohula in the Mexican highlands. The article reports that the pyramid is four times the size of the Great Pyramid of Giza in Egypt. I’ve been to Giza so I can only imagine how huge this one must be. Chohula was described by Cortez as “the most beautiful city outside Spain” and the BBC article reports that there are over 500 tunnels to be explored.

Mexico has been on my travel bucket list for some time but fell away as I started to read more about China and the Silk Roads cultures. However, an archaeologically-inspired visit would be an amazing thing to do. So much to do, so little time (and money).

And last but not least…

The car that gives back

There’s been a lot in the press about self-driving cars and I had my first Tesla close up a couple of weeks ago at their showroom in a local shopping centre. While there was no test drive (or test no-drive as the case may be), I did think that the Model S was very nice indeed.

But Tesla are not just applying their energy breakthroughs in the automotive industry. Via this week’s Springwise newsletter, I learned that my very own hometown of Melbourne may have their first sustainable suburb in new development, YarraBend. Applying Tesla’s technology may mean energy reductions of up to 34% with the developers also suggesting significant decreases in water usage (43%) and landfill (80%).

Before I moved to London in 2004, I read about an initiative to place solar panels on the roof of Melbourne’s Victoria Market in an effort to power the surrounding suburbs. I felt a little swell of Aussie pride that Melbourne continues to champion ways to address some of our critical climactic challenges.

So there you have it – my top four commuting gems from this week. It’s certainly been a rich vein so I hope you found something here to pique your curiosity.

I am typing this from the BA Lounge at Heathrow Airport, waiting for the flight that will take me across the pond to Seattle-A and her boys for a glorious 10 days of ‘hanging out’.

This one is inspired by something I saw on Springwise.com yesterday and got me thinking about that equal pay question. You see this was about a pop-up shop called 76<100 where you ‘pay what you’re paid’. So if you’re a woman and you buy something in this Pittsburgh emporium, you pay only 76% of the price because that’s the gender pay gap in Pittsburgh. (Springwise reports that the plan is to expand this concept to New Orleans next where the store will be called 66<100 – you do the maths. You can find out more at http://www.lessthan100.org.)

I’m reading all sorts of things in the media about women ‘issues’ – after all the suffragettes won the right to vote here in the UK a century ago and the general theme of all of these rallying cries is that we have not come so very far. The use of the word feminist is emerging in common parlance again after years of being tarred as the ‘other F-word’ and an election would not be an election in the UK without most of the parties bandying ‘women issues’ about as part of their appeal to the swinging voter (anyone see Labour’s pink campaign bus – I mean REALLY?)

For the most part it just sounds like noise to me and while I accept that there is still a gap to bridge, I just think that there are so many of these bridges to build and for so many of us. The problems of women’s representation on Boards and equal pay – while I do acknowledge their importance – pale when I think about the things I read, that I have never been exposed to – rape, ostracision, FGM, beatings and other torments seem a much greater problem to fix. And not just for women but for all groups who are at the ‘skinny end’ in the balance of society’s power.

And then last night I read the latest post from fellow blogging friend, Travelling Penn (travellingpenn@wordpress.com). We worked together a long time ago – she has since retrained as a communicator for World Vision and travels to far-flung places to support aid efforts for the world’s poorest and most powerless. She has been posting on Facebook recently about the power of global aid efforts to help those affected by the earthquake in Nepal. Anyway, in her post she shared some numbers – 60 million people facing an humanitarian crisis, 36 million of those children.

It puts the notion of equality into a different light doesn’t it?

It is an overwhelming set of numbers and my friend writes about remembering the face of each child she has helped to avoid despairing as she tots up the columns. And I thought to myself, whatever the crisis of equality – whether it’s gender, sexuality, poverty, race, religion…the list goes on – the difference we make is really person by person and moment by moment.

So when next I am admonished to ‘step up’ and ‘lean In’, I will do just that. Because while I’m just one person, so are all of the people I come into contact with each day. And with a little extra from all the ones, I have to believe that it is possible to make a difference. 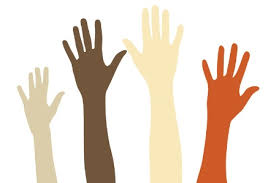