I was travelling to Pilsen with a colleague this week and having only met before very briefly, we took the opportunity to chat en route…in the taxi, on the Heathrow Express, in the airport lounge. You get the picture…lots of finding ways to make the time go faster while getting to where we had to be.

Anyway, we were chatting about my living in the UK and the invariable questions came up: Why did you leave? Will you go back? and What do you miss most?  Nothing unusual.

But this time the last question really made me think. What do I miss most?

It goes without saying family, family, family. And usually at this time of year, I would have answered something about really feeling the lack of sunshine and daylight hours during London’s winter months. But we’ve had a mild winter which in the last few weeks, has merged into a lovely Spring – beautiful blue skies, double digit (celsius) high temperatures and patches of colour everywhere as London’s parks, gardens and suburban streets are transformed by a riot of daffodils, crocuses and cherry blossoms.

And I’ve just come back from my Vitamin-D top up in Abu Dhabi so I’m missing the sunshine much less than usual.

So the question gave me pause. What do I really miss?

And then I thought back to my last trip Down Under and I knew…the coffee. Great, great coffee. Creamy lattes, foaming cappuccinos and pungent espressos with velvet-y golden crema.

I have not enjoyed coffee anywhere nearly as much as I have in Melbourne. Not even in Italy, the self-proclaimed mecca of coffee.

And it would seem that the voters on website booking.com agree, with 301 of them nominating Melbourne as having the best coffee in the world (followed by Vienna – 187 and Rome – 116).

It’s not the first time I’ve waxed lyrical about coffee here at Gidday from the UK and I have found a treasured favourite or two serving sensational shots here in London but there’s no hunting for these rare gems in Melbourne – great coffee is everywhere. 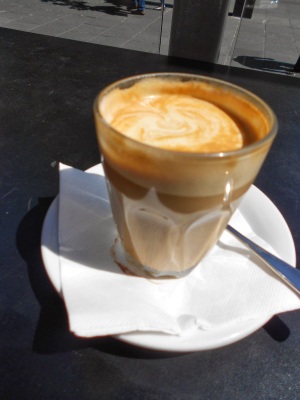 So I’ll be booking myself a Christmas Down Under this year to get me a fix!

Oh and Sydney? Sydney got 20 votes in the survey. Not that I’m competitive or anything.