Having returned from playing away in Abu Dhabi for a week, it was time to play a little closer to home again so this morning I was up and on the way to Brixton for another ‘backyard’ walking tour.

Brixton is in South London and being most notable for the Brixton Riots in 1981, it’s an area of London that it’s fair to say has been somewhat tainted by its turbulent past. But the area is also one of those ‘up-and-coming’ parts of London as home buyers seeking lower property prices move outwards from the city while still remaining in commuting range. In fact it’s one of the things that surprised me today – how near Brixton is to central London. (I thought it was much further out!)

Anyway our small group met at the Ritzy Cinema at 11am and headed down Coldharbour Lane to the frontline of the 1981 Riots at the intersection of Atlantic Avenue.

After a bit of background on the Riots from our guide Angela, we continued down Coldharbour Lane a little further to see Nuclear Dawn. This extraordinary mural was painted by Brian Barnes and finished in 1981. It features a large skeleton swathed in the flags of nations who had nuclear weapons at the time and paints a grimly powerful portrait of politics and the Cold War during the late 70s/early 80s. 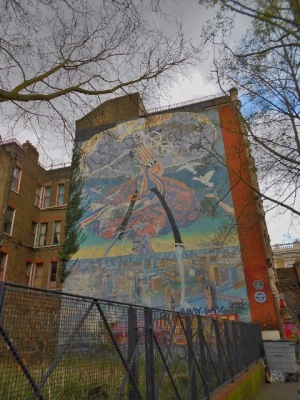 Turning away from the mural, we faced Southwyck House – also known as Brixton’s Barrier Block – an unusual building featuring the Brutalist architectural style common of the period in which it was built. 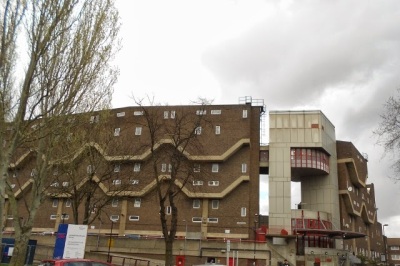 The Barrier Block has played a controversial role in Brixton’s history. The other side of the building features large windows and balconies and has been home to one of the world’s most famous artists, Damien Hirst. Ex Prime Minister John Major lived briefly in Brixton and his support for the demolition of the block later in his career was more than a little undermined by the fact his Planning Committee had approved its construction. Oops!

Our next stop was Brixton Village, a series of markets accessed through an entrance across Coldharbour Lane from the Nuclear Dawn mural. Fascinatingly enough, our short dash across the road was peppered with more art from the locals…

The produce stalls are far fewer and the markets have been taken over by restaurants and cafes. It was fairly quiet as we walked through but you could just imagine the little lanes buzzing with the energy and chatter of lunchtime or after work crowds.

Emerging from the markets it was a short walk down to Electric Avenue – yes the one made famous by the Eddy Grant song.

Further down Electric Avenue, we found Brixton Speaks an installation on the wall of the Iceland store. Created by author Will Self, Brixton Speaks pays homage to the unique Caribbean patois of the area. Click here for a much better photo! This was also the site where a nail-bomb exploded in 1999 injuring 39 people.

Turning right onto Brixton Hill we walked under the railway bridges to visit our next point of interest, the Ricky Bishop Memorial Tree. Ricky Bishop was taken into police custody in 2001 and was later admitted to hospital with unexplained injuries. The tree serves as a poignant reminder of the still-fractious relationship between the community and the local police.

We crossed over Brixton Hill and spent about 20 minutes away from the cacophony of the high street.

With that we headed out onto Acre Lane and wandered back to the Ritzy Cinema.

Nursing my hot chocolate on the tube ride home, I felt like I’d barely scratched the surface of this colourful neighbourhood, so different from my own yet discovering so many unexpected similarities in our cultures. And I mused once again at how utterly fascinating this big backyard of mine called London truly is.