The story so far: Inspired by the success of my trip to York in March, at the beginning of June I was off for another mid-week staycation, this time to Edinburgh. I had heard many good things about visiting the city and was looking forward to a few days exploring. After boarding at London’s King’s Cross station on a busy Monday morning, my seamless and comfortable train journey to Edinburgh’s Waverley Station took just under four and a half hours.

This post is the second of three and is designed to be an armchair tour of my brush with Edinburgh’s literary fraternity. Those of you that know me even a little will know that I love to read and there are a host of literary links in Edinburgh from Sir Walter Scott, J.M. Barrie (Peter Pan), Arthur Conan-Doyle (Sherlock Holmes) and Robert Burns (he of Burns night) – right through to modern masters like Ian Rankin (Inspector Rebus), Alexander McCall Smith (the No. 1 Ladies Detective Agency) and J.K. Rowling (Harry Potter).

Sir Walter Scott is a big deal here – he wrote Rob Roy and Ivanhoe, neither of which I have read, but there were quotes everywhere in the train station and when I emerged onto Princes Street, there was a stonking great monument to the bloke just down the road.

You’ll also find Scott at The Writers’ Museum – along with two other Scottish wordsmiths – Robert Burns and Robert Louis Stevenson – and on my last day I spent about an hour here admiring the personal effects, checking out the photos and reading about the lives of these famous men.

After three days in Edinburgh, I hadn’t found very much that paid tribute to another well-known literary Scot – Arthur Conan-Doyle who invented one of the world’s most famous detectives, Sherlock Holmes. Luckily Allan Foster’s Book Lovers’ Walking Tour plugged that gap and at one o’clock we met outside the museum and ventured off into yet another downpour.

Heading to the south side of the city, we entered Conan-Doyle territory with a couple of stops at the College of Surgeons – where as a student, he found the inspiration for Sherlock Holmes in Joseph Bell – and his local drinking hole, Rutherford’s Bar. The bar was also a favourite of Robert Louis Stevenson and the restaurant that occupies the building now is called The Hispaniola in a nod to Stevenson’s most famous novel, Treasure Island. 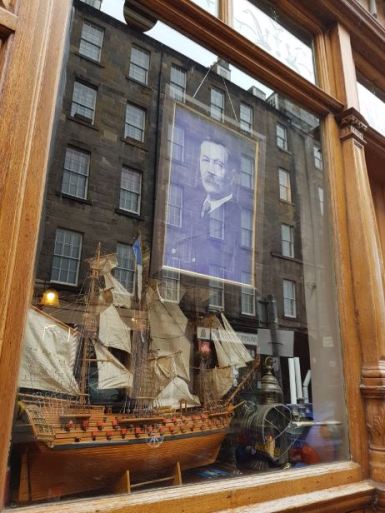 Photograph of Conan-Doyle at The Hispaniola Restaurant in Drummond Street

It was an interesting, behind-the-scenes sort of 90 minutes and pretty easy walking in spite of the weather. Allan’s knowledge covered so much more than I would have discovered on my own so I’d recommend this walk if you are even remotely bookish.

There are also quite a few eateries with literary links in Edinburgh and I particularly enjoyed The Queens Arms in Frederick Street (New Town) and the Deacon’s House Cafe off the Royal Mile in the Old Town. I also visited The Elephant House whose claim to fame was as the ‘birthplace of Harry Potter’, it being claimed that J.K. Rowling used to frequent the cafe when she was writing the books. It was well-appointed and spacious but I was underwhelmed by the service and food.

So that was the extent of my literary goings on in Scotland’s capital. My next, and final, Edinburgh post will shine a light on three of my favourite staycation moments. But if you’re coming along, you’d best bring your brolly…

If you are interesting in reading about my entire visit, here are the other posts in my armchair tour of Edinburgh:

Edinburgh: Inside and out (the next – and last – one)

Edinburgh: A royal trifecta (the first one)